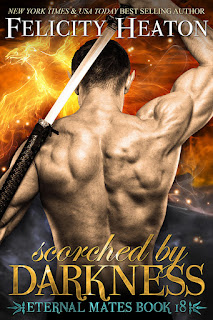 ✭💖✭OUT NOW! SCORCHED BY DARKNESS by Felicity Heaton! ✭💖✭ Even for one of the top assassins in Hell like him, Hartt’s latest contract would have been difficult enough, but there’s a complication—a beautiful, flame-haired, and dangerously tempting complication. Not only is the bewitching female a distraction he doesn’t need—she’s the competition. Mackenzie’s life hasn’t been easy. Held captive by blood mages who murdered her family, forced to spend every day guarding her secret, and now she lands the biggest contract ever—one that would set her assassin’s guild up as one of the best in Hell—and it turns out her client hasn’t only hired her. He’s hired the top guild in Hell too. Worse, the male she’s up against is wickedly alluring, a dark elf warrior who sets her blood on fire, and the heat that sparks between them is in danger of burning her resolve to take him down to ashes. It’s a race against time and each other to fulfil the contract by taking out one of the most dangerous men in Hell, a vampire with a name befitting of his bloody history, but who will be the one to claim victory—one of them or the King of Death? Find out in Scorched by Darkness, an enemies-to-lovers fated mates paranormal romance that will set your heart on fire! Grab it now in ebook or paperback: 💜 http://bit.ly/em18-bk 💖 SCORCHED BY DARKNESS by Felicity Heaton💖 He might be Hell's top assassin, but Hartt's latest contract is more dangerous than he'd imagined. Not only is his mark the King of Death, but he has competition--beautiful, wickedly tempting competition. 💜 http://bit.ly/em18-bk
Posted by Girl with Pen at 6:00 AM