Review of the Broken Daughter by Aimee Shaye 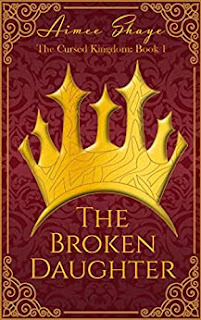 Long ago, magick filled the land of Dramolux. But one sorceress delved too deep into dark sorcery and tainted the creatures inhabiting the land. In an effort to save all creatures, a noble sentinel locked the dark powers away. For generations, the dark ones were controlled, passed down to those who ruled the sentinel kingdom. All is peaceful until the newest sentinel queen is murdered and all the magick is released back into the world. It is now up to her daughter, Princess Aymeri--who has no knowledge of what she truly is--to recapture it. But another dark sorceress is on the rise. She wants to lay claim to the magick and wield it herself, in an effort to take all of Dramolux under her control. The odds are against Aymeri and the magick the sorceress wants is evil. Aymeri must prepare to battle or die fighting for the survival of her people.
MY REVIEW:
THE BROKEN DAUGHTER  WAS A PLEASANT SURPRISE TO ME AND THE FIRST BOOK I HAVE READ BY AUTHOR AIMEE SHAYE.  IT CERTAINLY NOT GOING TO BE THE LAST BOOK I READ BY THIS FABULOUS AUTHOR.  YOU ARE DRAWN INTO A MAGICAL LAND FILLED WITH EVERY MAGICAL CREATURE YOU COULD HAVE EVER IMAGINED. NOT ONLY IS THE KINGDOM FILLED WITH GOOD BUT ALSO EVIL.  PRINCESS AYMERI FINDS HER MOTHER DEAD AND BECOMES A QUEEN OVERNIGHT.  I REALLY LOVE AYMERI WHO MANAGES TO KEEP IT TOGETHER DESPITE THE LOSS OF HER MOTHER. SHE IS VERY STRONG AND DEFINITELY A LEADER LIKE HER MOTHER.  DESPITE HER TRAINING, HER MOTHER NEVER TOLD HER EVERYTHING SO SHE HAS TO SEEK THE TRUTH OUT.  AYMERI HAS NO IDEA WHO SHE TRULY IS AND HOW TO RUN A KINGDOM.  ALONG WITH HER FRIENDS, AYMERI LEARNS HER TRUE POWERS AND DARK SECRETS. SHE FACES EVIL LIKE SHE HAS NEVER SEEN BEFORE. WILL SHE PREVAIL?
I REALLY LOVED THE BROKEN DAUGHTER, IT DREW ME IN FROM THE VERY PAGE UNTIL THE VERY END.  AIMEE SHAYE HAS CREATED THIS UNIQUE MAGICAL KINGDOM AND CHARACTERS.  I LOVE THE STORY AND THE CHARACTERS AND I CAN'T WAIT TO READ THE NEXT BOOK IN THE SERIES.  THIS IS A DEFINITE MUST READ.  YOU HAVE NO IDEA WHAT YOU ARE MISSING. 5 STARS
Biography “I am many things but normal is not one of them,” says Aimee Shaye when asked to describe herself. She is a novelist whose genres include Fantasy and all its subgenres. When asked what drives her, Aimee says, “The world around me. The people I know. The love and support of my family." Aimee is a family-driven person and enjoys meeting and getting to know her readers. She is full of life and down-to-earth. She has a personality that fills the room. More than that, Aimee is someone people easily open up to. Her passion for life, reading, and writing are evident in her novels and she leaves no stone unturned in showcasing real emotions even in a fantasy world. Readers from all of the world enjoy reading her novels which are suitable for all ages, despite her characters being in their late teens and early twenties. You can find all of Aimee's Social Media at the following link: http://linktr.ee/AimeeShaye
Posted by Girl with Pen at 6:00 AM