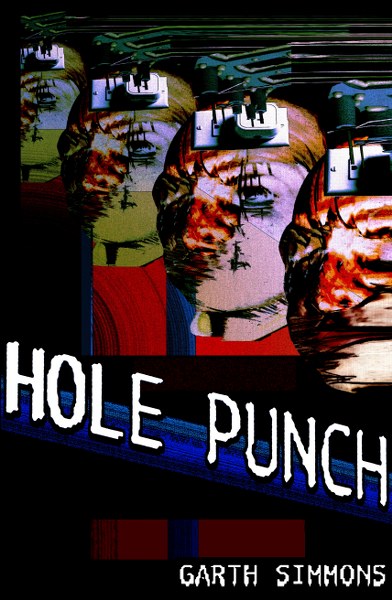 HOLE PUNCH is:
The height of the Earth Empire – where War Bricks flatten alien civilisations.
Yorkshire 1985 – where a child's mind is patched together with trauma.
Ancient Greece – where Socrates discovers a carnal method of time-travel.
Mars 2348 – where crime and terror haunt the Martian Habitation Domes.
The Mistake's skull – where Muscle Society achieves self-destruction.
Delaware Dost – where mindfulness prevails and hierarchy is understood.
The End of Everything – where convert concepts welcome refugees into the folds of theory.
All these places (and many more!) reside within the tangled text of Hole Punch.
Goodreads * Amazon 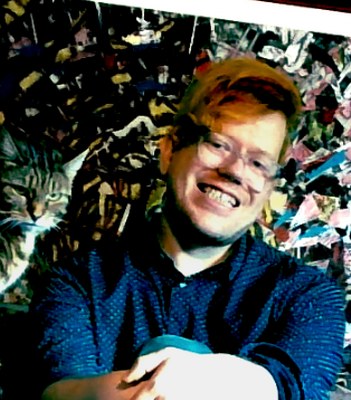 Garth Simmons was born in 1981 in Doncaster, South Yorkshire, UK in 1981. He’s a visual artist who’s made paintings, installations, animations and pattern designs. He has had exhibits everywhere from Scarborough to Los Angeles. His pattern designs were in the Golden Globes and Fashion Times and he likes to remind people of this. Writing has always been a feature of his artwork. He would write directly onto his artwork, or by collaging “stream of consciousness” notes.
In 2015, whilst working in a data entry position for Siemens, he began writing short stories as Facebook posts. At first they were daydreams of outrageous acts he could commit whilst at work (if he were professionally or ethically allowed). Later they were stories in other settings. Some dark memoirs of times in various school settings and learning programmes (for those who are “not on the right level”).
These stories resonated with his social media followers. He was encouraged to put them into a collection and seek out publication. While putting these stories into a contextual order he realised they formed a larger narrative. A tapestry of recurring themes, settings and characters. They made up a larger biographical webwork and subjective statement on the world. A hole punched through this fabric, hence the title Hole Punch.
Since completing Hole Punch, he has been working on three long-form novels. Also he has an actual short story collection comprised of several 10’000 word stories. He also does a podcast called Slanderhour and has an EP in the works. His philosophy is that “the more things you make, the more you enjoy your own company”.
Apart from creativity, he loves cats, mochas, wearing blazers, arthouse films and many ropey science fiction series.
Website * Facebook * Twitter * Instagram * Amazon * Goodreads