Grant remembered waking in a hospital bed with Crystal's hand on his forehead. And no matter how hard he begged, the girl said she must leave. She needed to get away from her father and couldn't stay with his family due to the generations-long feud. Crystal joined the Army. So did he. Then he came home, ran for sheriff and won.

The first thing he did when in office was open the file labeled Missing and Presumed Dead. No one had seen or heard from the mother of the Dane children in years. Did her husband kill her as Royce Dane said? If not, how did she disappear without a trace? But things take an odd twist when he discovers his mother's involvement.

Crystal likes everything about the man Grant is. But she isn't cut out for mixing in the upper echelon of Chandler County society. Her brother needs to know what happened to their mother, Crystal isn't so sure she cares. If her mother walked away from her children, Crystal doesn't need her now. 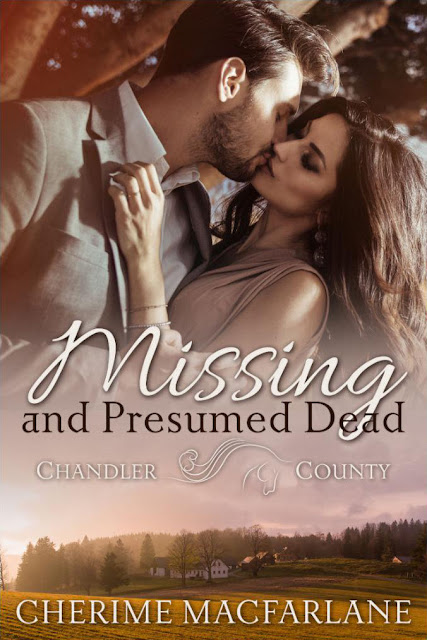 Crystal let the other passengers leave ahead of her. She needed a little time to psych herself up into getting off the plane. She wanted to see Gentry and meet the man who trundled her off to Alaska without a by-your-leave. But she didn't think Gentry would appreciate it if she busted his nose for him at first sight.


The line cleared out and only the crew remained. Time to get it over with. The whole thing bothered her. Without the structure of the Army to keep her on the straight and narrow, Crystal wondered how she would make it in the civvy world.

She pulled the O.D. green duffel out of the bin and followed the last of the passengers. The pilot said the weather was clear and a comfortable 43 degrees. A small snort followed that thought.

Comfortable for who? Dudes wrapped in two layers of down parkas? What did the man consider uncomfortable? No! Scratch that. A minus something probably, maybe in the low thirties.

With a sigh, she entered the long covered walkway leading to the interior of the terminal. She got a good look at the whole thing before they landed. The entire complex, runways and all would fit in the back corner of Atlanta's Hartsfield–Jackson airport without any fuss.

She followed the signs for the baggage claim area. Not that she had any baggage. Gentry said once she got past security, they would find her.

As soon as she got Gentry to herself, it would be time to spill the beans. Well, perhaps not all of it. The kid didn't need to know she set fire to the barn in a fit of rage. That would stay her secret.

Without the anonymity of her uniform, Crystal felt naked. Why in the hell did she let Royce and Uncle Thad talk her out of re-upping? She hadn't been drunk and just didn't get it.

Liar! Her mind screamed. She knew why. The phone call with Grant played all over again in her head. It was the part about her having a tight ass. She caught the warmth in his tone and figured he had to be smiling when he made the comment.

It was amazing how all airports had the same general layout. Ahead of her a large bank of windows stood on the other side of steps and escalators. Lots of people stood to the side as they waited for passengers to leave the secured area.

"Crystal! Hun!" That was all the warning she got before her baby sister slammed into her with arms wide.

The duffel hit the floor and Crystal wrapped both arms around the kid. With his hands stuffed in the pocket of his jeans, a guy with dark hair and equally dark eyes watched Gentry hug her.

Russ. That was the husband's name. The dude could play poker with the best of them. Crystal couldn't tell anything from a quick glance at his expression.

But her sister felt different. She must have put on about ten or fifteen pounds. Was she pregnant? Crystal sure hoped the hell not. Gentry was just a baby yet. She needed time to figure out who she was since getting out from under Augie's thumb.

Gentry turned to the guy with a smile on her face. "Russ, come and meet my sister."

When he walked forward and held out a hand, Crystal thought she caught sight of a wary expression in his dark eyes. Then he closed up tighter than hell.

That's okay, Alaska. I'm not sure I like your ass either. But for Gentry's sake, she planned to keep it all screwed in tight. The girl looked happy enough. If Gentry loved the little shit and didn't want to leave, so be it.

There would be other visits. If things didn't work out, they would all have a home at the Reynolds place. And that was the other reason she let them talk her out of enlisting again. Sheila. If Royce didn't get some kind of closure on the thing with their mother, the kid might lose what marbles he had left.

For now, she had a week to assess how Gentry was making out up here. The other two guys in Chandler County would want a full report on her findings. But it wouldn't do to alienate the husband right off.

Crystal shook his hand. She made the pressure just firm enough, but not like a wuss. She would treat him like a fresh out of school junior officer. Crystal could do that in her sleep.

She settled in the seat behind Russ. Gentry crawled into the extended cab with her. They had a few miles to go before they reached Homer. Then would come a boat ride to Seldovia. Crystal shook her head. It was a damn good thing she slept on the plane.

Gentry grabbed her hand and squeezed. "I'm so glad to see you. But why did you leave the service?"

With a grin, Crystal chucked her under the chin. "Royce, Uncle Thad and I are planning to make the old man and Johnny's life hell. And it's been a long time coming."

I came to Alaska kicking and screaming in 1976, and I never want to leave. I cut firewood on shares for money to get through the winter. I swore I would not live above the Alaska Range because it was too cold there and wound up in the Copper River Basin where it got just a cold as Fairbanks.

My second husband, a Scot from Glasgow, was the love of my life. When I write Scots dialect, I experienced hearing it from my in-laws. Each time my husband got on the phone to Scotland after five seconds, I could hardly understand a word. I was my second husband's chief mechanic's helper and roadie.

I live in a cabin which is slowly being surrounded by the city and wish I were farther out. My cat and Husky-Collie mix dog are happy in our little slice of heaven called Alaska. In the silence of winter dreams of people and places provide a rich pool of ideas to explore.

As a reporter for the Copper Valley Views, Cherime MacFarlane received a letter of commendation from the Copper River Native Association for fair and balanced reporting.