INCLINED TO SCANDAL
by Zoë Mullins

A misfit in proper society, Lady Georgiana will risk her future for a night of pleasure with Captain Wrath.

Lady Georgiana Knolls is a misfit in proper society, only there because her brother insists she have a Season and learn what it means to be ‘a lady’. The rules and etiquette forced upon unmarried women of her class are stifling and she breaks them more often and more publicly than is wise.

Which is how she meets Captain Wrath. His arrogance and confidence are nearly a match for her own and for a chance of pleasure with him, she will risk the future she’s been waiting for.

After years at sea, Captain Wrath is ready to resume the mantle of the Earl of Rathbridge. His first good deed? To save his best friend’s sister from blackmail by offering her the protection of his name…as her fiancé. The faux betrothal turns real when he realizes she is the same beauty who’s been sharing his bed since his return.

The earl is ready to make things right, but to do that, he will have to unmask a blackmailer, convince his best friend that he is suitable marriage material for his beloved sister and prove to Georgie that becoming his wife won’t stifle the independence she craves. 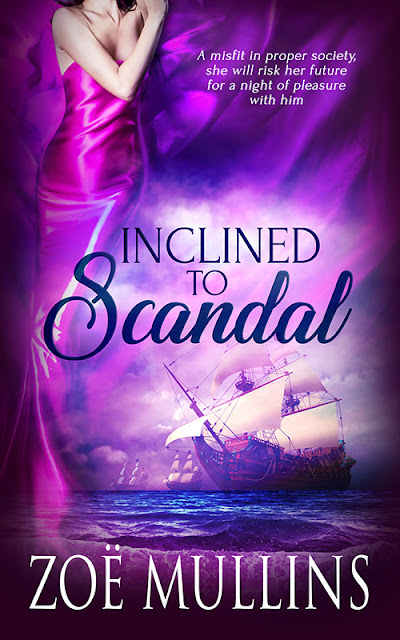 This had been, Georgiana decided, a no-good, horrible day. She had just lost five hundred pounds. Her stern Methodist uncle was bound to find out and Kit would likely tear a strip off her as well. Not that Kit would care that she’d played, just that she’d lost. He’d taught her better than that.

She looked at her opponent with consternation. She felt as if she should know him, but she couldn’t place him. He wasn’t fashionable, though his clothes were obviously from the best tailor. No one with that much money should look like that, she thought.

From his wide-shouldered, well-sculpted chest, narrow waist and muscled thighs, he was built like a laborer but he dressed better than the prince regent. You’d almost think he was a gentleman, she thought, except for his raven hair, which though gleaming, was too long to be fashionable, as it fell not just past his collar but past his shoulders.

“I was hoping you’d be up for another game.” He leaned forward in his chair and raised an eyebrow arrogantly. She wondered if they taught that look to men in school. Her brother could give her the same look. Usually when he knew she was lying about something.

“As much as I would love not to have to explain to my uncle why I need to withdraw the funds, I really shouldn’t play with you. I have nothing left to offer,” she drawled, then chastised herself. She should not be flirting with this man. She had no excuse. Your aunt and uncle are trying to marry you off to an old goat, a little voice in her head reminded her. That is no excuse, she told it.

Goosebumps rose where his dark eyes roamed over her, caressing her. Her chest flushed when his gaze lingered on her breasts.

“But I am unwilling to wager my body to your pleasure.”

“I promise you, when you give yourself to me it will be for pleasure not because you lost a wager. When I take you to bed, it will be because you want to be there, beneath me. You want to feel me inside of you.”

She was spellbound by his bold words, and the heat uncurling in her belly. She didn’t notice when he reached out and pulled on the ties of her mask. It dropped to her lap.

“No hiding, love.” He grinned at her. “The choice is yours.”

He didn’t have piggy eyes or fetid breath, she’d give him that. He was strong and virile, and she realized she was being offered an unparalleled opportunity. With the safety of anonymity inside this room, she could afford whatever the evening held. She thought of her uncle threatening to marry her off. She was a spinster after all, and had only been kissed three times. How can I afford to say no? she wondered.

A prolific writer, even in elementary school, she was jotting down poems and stories whenever she had the chance - usually during math class.


After many years of working in corporate communications, Zoë decided in 2015 it was time to focus her energy on the kind of writing she loved – hot romances with strong, alpha heroes and quirky, independent heroines.


Zoë’s husband of nearly 20 years threw his full support behind that dream and loves to tell people his wife is a romance author. They live in Atlantic Canada with their two crazy collies. When not at her computer, you will find Zoë chasing after her muddy dogs, working in the garden or helping to renovate their money-pit of a house.