Review of Apple Pie to Die for by Sharon Kleve 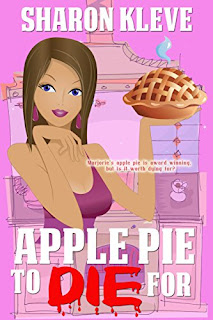 Marjorie’s apple pie is award winning, but is it worth dying for?

All Marjorie Vanhorn desires is to make people happy with her award-winning pies—and to be kissed by the delectable county medical examiner, Anderson Swift.
Marjorie’s nemesis is Eloise, the newly appointed county fair organizer, she is blackmailing contestants to get their award-winning recipes. She really wants Marjorie’s apple pie recipe, and if she doesn’t get it, she is willing do whatever it takes to stop Marjorie from winning more blue ribbons.
After being released, jailbird Vega disappears. Kelli and her son Joey are finally free of her physically abusive husband. Nobody misses him, not even his parents.
When Vance, Vega’s twin brother is released from prison, he heads for Marjorie's house where he suspects he might find his brother...and a little fun. Marjorie has no desire to be Vance’s fun.

APPLE PIE TO DIE FOR IS ANOTHER ENJOYABLE COZY MYSTERY AND ROMANTIC SUSPENSE BY THE AWESOME SHARON KLEVE.  WE MEET MARJORIE WHO BAKES DELICIOUS APPLE PIES AND IS BEING PURSUED BY MEDICAL EXAMINER, ANDERSON SWIFT.  IT IS VERY ENTERTAINING WATCHING ANDERSON TRYING TO CONVINCE MARJORIE TO GO OUT WITH HIM.  MARJORIE IS AFRAID OF GETTING CLOSE TO ANYONE BECAUSE SHE HAS A SECRET THAT COULD DESTROY ANY RELATIONSHIP SHE DEVELOPS WITH ANDERSON.   WILL ANDERSON LEARN OF MARJORIE'S SECRET?

I REALLY ENJOYED MARJORIE'S CHARACTER.  SHE IS SUCH A SWEET WOMAN AND A VERY GOOD FRIEND WHO LOVES TO COOK APPLE PIES.  HER SECRET WAS QUITE A SURPRISE BUT IF YOU WANT TO KNOW WHAT THE SECRET IS YOU HAVE TO READ APPLE PIE TO DIE FOR.  YOU WILL LOVE SHARON KLEVE'S WRITING AND HER STORIES.  THEY ARE REALLY GOOD. 5 STARS

Biography
Sharon Kleve was born and raised in Washington and currently lives on the Olympic Peninsula with her husband.

One of her favorite things to do is pick up a new book and sink into the story, immersing herself in the emotions between the characters. She hopes to inspire her readers the same way her favorite authors have inspired her.

When not writing, she can usually be found either curled up in her recliner with her cat and a good book, or in the kitchen baking sourdough bread or bagels.