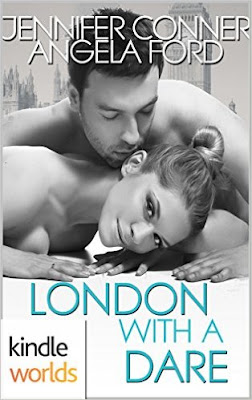 Chapple Palmer is the captain of one of the top soccer teams in the world, the London Lions. He should get more respect, but due to bad press he has a bad boy reputation in the British tabloids that he can’t seem to shake. In fact, he's even beginning to believe the things they say about him. Chapple knows his playing days are numbered and the last thing he needs is to be stuck babysitting an American billionaire, Ian Dare and his wife, who are there to promote Dare's American football team's exhibition game in London.

Elisha Sheppard is fairly new at being the Dare's scheduling assistant. She knows how important it is to stay professional and detail oriented at every moment. So why is Elisha letting herself be distracted by Chapple Palmer who she can guess is nothing but trouble, not to mention a heart-breaker? Why is she finding it so easy to say yes to his every invitation when her brain is screaming no?

After a disastrous sexual encounter with Elisha, Chapple realizes that he's proved the truth in all the tabloid rumors. Why would Elisha even talk to him? How can he make it up to her? Chapple feels a connection with Elisha he hasn’t felt with a woman in a long time. If she’ll give him another chance, he'll prove to her that he's the lover she's only dreamed of. But can he also trust her with his heart? 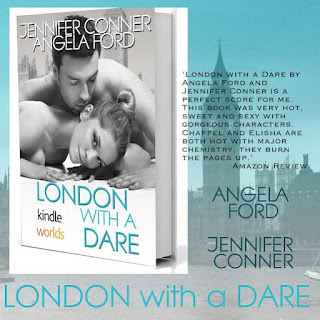 In London with a Dare, their first sexual encounter is disastrous...Chapple wants to prove he can be the lover Elisha’s dreamed about. But this time, Elisha draws up a contract with the hot soccer player...


“There’s much you owe me. You must pay the consequence of your behavior,” she said in a tone that demanded he follow her lead.


“I’m all yours.” He took one step back and met her eyes. He extended his arms to surrender.


“Good.” She smiled. “Now that we have an understanding, you need to cure my ache. Slowly, this time, the way I like it,” she added after a quick intake of air.


“All right.” His low hearty chuckle told her he was game. Elisha lifted her hands to his rock-hard chest. She slightly dug her claws inward. Her tongue peeked out to wet her lips and she raised her eyes to meet his. She felt his hard swallow beneath her hands.


“Any foul play, Mr. Palmer, will result in penalty. Or worse; suspension and it wouldn’t be for one game. Do you agree to abide by my contract and regulations?”


His lips curved into a sexy smile. “Where do I sign?”


“Right here” She reached for his hand and led his finger to graze along her lips. He moved forward. His lips met hers. She remembered the taste of him. He began with a soft tease against her mouth and then opened them with the tip of his tongue. Once his tongue had entry she moved her hands into that sexy mess of hair and pulled him closer to deepen the kiss. Her action created a deep moan. She took that as a signed deal....


.... Chapple kissed a trail down her neck, across her shoulders, breast, and then lower. She felt every hot inch of his heated skin, as he slid his hands and tongue over her. Elisha could barely pull in a shaky breath when he cradled himself between her thighs.


“I’m liking these contract negotiations.” He pressed her legs apart and slid a skilled finger over her wetness. “Especially the way I can sign my signature. I’ve signed many autographs and contracts, but never one I’ve enjoyed this much.” He trailed his wet finger in swooping loops over her thigh as if to sign his name. 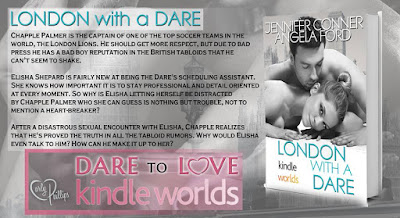 Chappell is a soccer player in England who is showing Ian and Riley Dare around and Elisha is their activity director. When chapel first sees Elisha he realizes that he wants to get to know her. They do get to know each other and have great chemistry. Will they be able to make it work even though they live away from each other. This was a great quick read. Another great addition to the dare to love kindle world Carly Phillips world. Also these are two more new to me authors. By theresa on January 26, 2016 (Verified Purchase)

So I started this book, and didn't get too far in to it before deciding I couldn't stand the hero. Like, wanted to strangle him. But Chapple had just enough appeal to make me continue reading to see if he could redeem himself, and I am so glad I didn't give up on him (even when he pulled his BS, you could feel his remorse). Elisha is a fantastic heroine, who doesn't put up with anyone's crap. I love how she didn't give in immediately when Chapple was an @$. The chemistry between the 2 was crazy, and the sex scenes?? Omg. A fantastic read, by 2 new to me authors that I will definitely be checking out more of. By sferguson105 on January 27, 2016 (Verified Purchase) 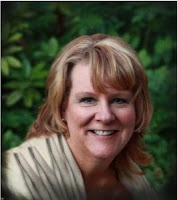 Jennifer Conner is a best-selling Northwest author who has sixty novels and short stories in ebook, paperback, and audiobooks. She writes in Christmas Romance, Contemporary Romance, Paranormal Romance, Historical Romance, and Erotica.

She has hit Amazon's top fifty authors ranking and her books have been #1 in sales.

Her novel Shot in the Dark was a finalist in the Emerald City Opener, Cleveland, and Toronto RWA contests.

Jennifer is an Associate Publisher for the indie e-book publisher, Books to Go Now who resides in the Seattle area. They pride themselves in helping new authors get their foot in the door with well-edited manuscripts, professional covers, and platforms uploads.

She lives in a hundred year old house that she grew up in. Her semi-small town holds an interesting mix of resident hillbillies, yuppies and Navy Seals. And of course Seattle, only a few miles away, is the birthplace of Starbucks so coffee is always on the check list. She blows glass beads with a blow torch, (which relieves a lot of stress and people don't bother you) and is a huge fan of musicals. 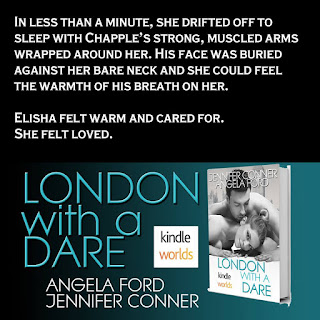