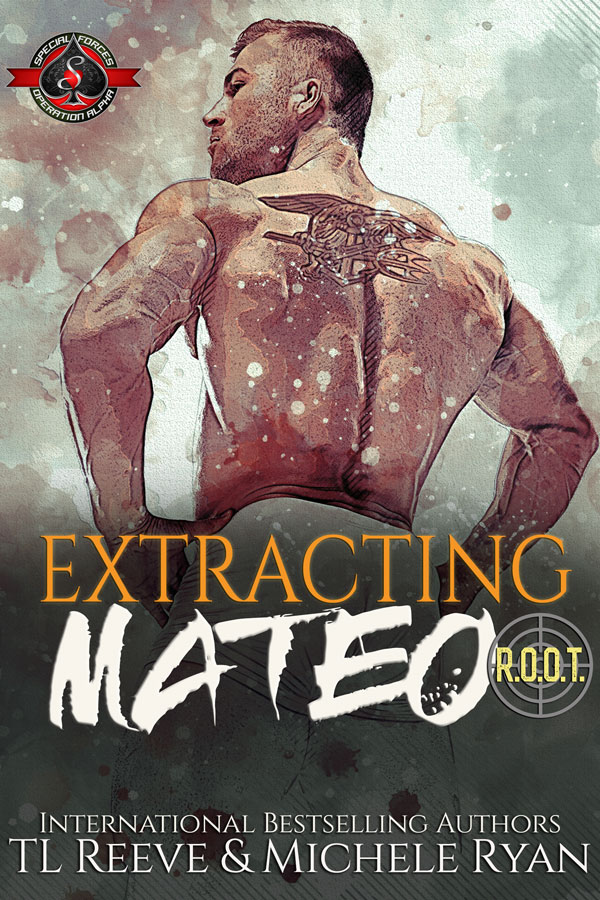 Noah Hanover doesn’t mix business with pleasure—ever. His relationship and subsequent marriage to Mateo Aquino, hasn’t even been a blip on his team’s radar. He enjoys the peace and quiet when he’s able to come home to his husband and telling anyone would destroy his secret double life.

High school history teacher, Mateo Aquino, loves his job and his kids and is always willing to help anyone in need. When a man approaches him appearing lost, Mateo is thrust into the middle of a war he had no idea was happening around him.

In order to save Mateo’s life, Noah must expose the one thing he liked to keep tucked away—his marriage. With the help of Noah’s teammates, John “Tex” Keegan, and two temporary new recruits for R.O.O.T: Scotty “Ears” Reisner and AJ “Two Hands” Hoover, Noah will set out to find his husband.

However, when the suspect escapes, Mateo and Noah are thrown into a new reality where Noah’s job is exposed, and the things Mateo took for granted are destroyed. Can Mateo accept Noah’s double life? Will Noah be able to track down Mateo’s kidnapper before he strikes again? Or, are they once again, running out of time?

The door to the examination room opened, and there stood Noah. He’d removed the paint from his face, but his clothes were the same. Mateo didn’t know this man. Yes, it was his husband, yet not. He raked his gaze over Noah. He always appreciated his muscular body. Always enjoyed the hard lines and the way his lover cradled Mateo’s body to his. He figured Noah had a gym fetish or had seen Mateo’s admiration and continued to go to please him.

The corner of Noah’s mouth kicked upward. The bastard. He should hate his husband. “I see Doc Rae got you fixed up.”

Mateo sniffed as he slipped off the table. “Shouldn’t have had to.”

The cocky expression on Noah’s face disappeared. “You’re absolutely right.” Noah brought one of his arms out from behind his back. “We found this while clearing the building. Thought you could use it.”

His bag with his initials emblazoned on the front—a present from Noah after he’d graduated with a Master’s in history and found his first teaching position. The well-worn leather satchel went with Mateo everywhere. It was like a security blanket of sorts. A way to keep a piece of Noah with him, even when his husband wasn’t home. “Ev-everything’s inside still?”

Noah nodded. “Computer screen is trashed, but the hardware is still intact. Scotty and AJ are working as we speak to get the hard drive into one of our heavy-duty laptops. Your notes and paperwork from your students are still there as well. I-I couldn’t find your glasses though.”

“I can get those,” Rae said. “As long as you can tell me who your optometrist is.”

“Perfect. I’m sure Asher can get them expedited to you.”

Mateo let out a breath of relief. “I am still furious with you.”

She nodded. “He is. I gave him instructions for tonight. Tomorrow, I’ll check on the stitches—see how he’s mending.”

“You’re both welcome, she replied then hesitated.

“Spit it out,” Noah grumbled.

“Nothing,” she stated. “Mateo, remember to keep your stitches moist.”

“Be gentle,” she said while grabbing something out of the drawer beside her. “Also, be safe.”

He cocked a brow as she closed the distance between them. “Always, Doc.” She placed several foil packets into his hands, and Noah roared with laughter before leaning into Mateo, who stared at the packaged disks in his husband’s hands. “Should you tell her, or should I?”

Amazon US I Amazon Universal

TL Reeve: TL Reeve, a best-selling, multi-published author, was born out of a love of family and a bond that became unbreakable. Living in Alabama, TL misses Los Angeles, and will one day return to the beaches of Southern California. When not writing something hot and sexy, TL can be found curled up with a good book, or working on homework with a cute little pixie.

Michele Ryan: Michele Ryan is an author with Decadent and After Glows Publishing. She embraced her creative passion and co-authored several books with fellow author TL Reeve. Michele has also published two solo novellas. Michele is a lifelong resident of the state of New Jersey, along with her husband and three children, whom she refers to as her hobbits. When Michele is not plotting or writing, she can be found either volunteering at her children’s school or reading.