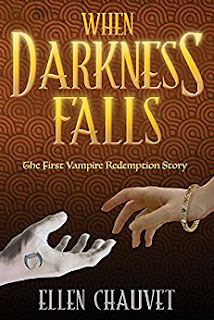 Lexie Miles, a southern belle living her dream life in Paris, is devastated when her best friend Emma is brutally raped and murdered by vampires. From that moment Lexie’s “perfect world” begins to crumble. She discovers her entire life has been a sham and everyone she cares about has been lying to her. Angry doesn’t begin to describe her reaction to the news.

Plunged into a two-thousand year old war between good and evil, she is propelled into a world of blood, lust and dark secrets. She must embrace her birthright to fight an ancient threat to humanity. Bequeathed with the dubious gift of being the “Chosen One,” Lexie meets the enigmatic Etienne Benoit. She falls hard for him and when he betrays her, she vows to get revenge. After all, she is a vampire executioner and killing vampire is what she does.

I HAVE NEVER READ ANYTHING BY ELLEN CHAUVET AND I AM SO GLAD I DID.  I ABSOLUTELY LOVE WHEN DARKNESS FALLS.  I AM A BIG FAN OF PARANORMAL ESPECIALLY VAMPIRES.  THIS IS NOT YOUR TYPICAL VAMPIRE STORY.  IT IS SO MUCH MORE.  I LOVE ELLEN'S TAKE ON  HOW THE VAMPIRE CAME TO  BE AND THE WAR BETWEEN GOOD AND EVIL THAT RESULTED FROM IT.  WHAT AN INTERESTING CONCEPT.

WE ARE INTRODUCED TO LEXI WHO LIVES IN PARIS.  SHE IS DEVASTATED WHEN HER BEST FRIEND, EMMA IS RAPED AND MURDERED.  BUT WHAT IS MORE SHOCKING IS THAT HER FRIEND WAS KILLED AND RAPED BY VAMPIRES. AT FIRST, IT IS HARD TO GRASP BUT SHE EVENTUALLY ACCEPTS ALONG WITH WHO SHE IS AND BEGINS HER TRAINING AS A VAMPIRE EXECUTIONER.  WHEN LEXIE AND ETIENNE MEET FOR THE FIRST TIME, THERE IS INSTANT CHEMISTRY BETWEEN THEM.  THE MORE TIME THEY SPEND TOGETHER THE DEEPER THEIR LOVE IS.  BUT WHAT HAPPENS WHEN ETIENNE BETRAYS LEXI?  WILL SHE BE ABLE TO SAVE HIM OR HAVE TO DESTROY HIM?

I REALLY ENJOYED READING WHEN THE DARKNESS FALLS.  YOU ARE HOOKED FROM THE VERY FIRST PAGE AND WILL NOT WANT TO PUT THE BOOK DOWN.  I REALLY ENJOYED THE STORY LINE AND LOVED THE CHARACTERS.  THE AUTHOR DID A WONDERFUL JOB IN DEVELOPING THE CHARACTERS.  I REALLY LOVED LEXI AND ETIENNE TOGETHER.  I FELT THEIR CHEMISTRY.  THEY ARE PERFECT FOR ONE ANOTHER.  LEXI IS A REALLY STRONG CHARACTER.  WHEN SHE LEARNS THE TRUTH ABOUT WHO SHE REALLY IS, SHE ACCEPTS IT QUICKLY AND BEGINS TRAINING.  I WAS REALLY DISAPPOINTED WITH HOW IT ENDED THOUGH.  THERE IS A CLIFFHANGER.  I AM LOOKING FORWARD TO READING THE NEXT BOOK IN THE SERIES TO SEE WHAT HAPPENS NEXT.  4 STARS

Biography
Ellen Chauvet lives in Vancouver, British Columbia. Her love for reading and writing developed at an early age and she wrote several short stories and plays which were lost over the years. In 2003 a friend introduced her to "Buffy the Vampire Slayer", and Ellen was fascinated by the idea of good and evil vampires. She particularly loves Anne Rice, Charlaine Harris and Laurell K. Hamilton. 'When Darkness Falls' if the first in a series of books called 'The Vampire Redemption Series' and is adult fiction.