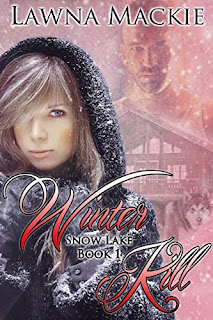 Pippin Bartlett seems to have an ordinary life living in New York as a young successful author. Only a few people know the truth.

At the age of twelve, Pippin was abducted by her mentally ill father who goes on a killing rampage in the process. Fortunately she is rescued outside the small town of Snow Lake, Manitoba by ex-sniper and CSIS Agent Matt Lalor, who shoots and reportedly kills the man although the body is never recovered.

Fast-forward ten years and we find Pippin writing successful novels in New York under the alias of Avery Woods. Her words help lessen the impact of the terror she lived through. That is until a series of fan letters arrive. And not just from any fan, but one who sounds a lot like her father and is determined to finish the failed job from ten years ago.

Matt Lalor has secrets of his own. A career that ended badly and one he wishes to forget. He lives his life in a remote cabin in Snow Lake where, whenever possible, he avoids people. With two notable exceptions he mostly succeeds. The first is the day he is required to rescue a twelve-year old girl. Never missing a shot he believes whole-heartedly the man is dead. The second is the day twenty-two year old Pippin drives into a snowbank on his property to turn his world upside down.

She’s being hunted by a killer for a second time, and Matt refuses to let harm come to her. What he doesn’t expect is for the fearless and beautiful young woman to capture his heart in the process.

THIS IS THE FIRST TIME I HAVE READ ANYTHING BY LAWNA MACKIE BEFORE AND I AM SO GLAD I DID.  WINTER KILL IS BOOK 1 OF THE SNOW LAKE SERIES.  I HAVE TO SAY WHAT AN EXCELLENT START TO THE SERIES.  LAWNA DID NOT DISAPPOINT ME AT ALL.  THERE IS SO MUCH MYSTERY AND SUSPENSE THROUGHOUT THE BOOK IT WAS PRETTY HARD FOR ME TO FIGURE OUT WHO THE TRUE KILLER WAS AND WHEN I DID I WAS COMPLETELY SURPRISED.

WE MEET PIPPIN WHO IS KIDNAPPED BY HER ILL FATHER WHEN SHE IS 12 YEARS OLD.  HE PLANS ON KILLING HER.  EX-SNIPER, MATT AND HIS ADORABLE DOG RESCUE PIPPIN.  MATT ENDS UP KILLING HER FATHER.  PIPPIN HAS NEVER FORGET HER RESCUERS AND HAS BECOME AN AUTHOR.  SHE WRITES ABOUT HER RESCUERS AND SNOW LAKE.  PIPPIN RETURNS TEN YEARS LATER TO FACE HER PAST AND FIGURED OUT WHO IS TRYING TO KILL HER FOR A SECOND TIME.  MATT REFUSES TO ALLOW ANYTHING TO HAPPEN TO PIPPIN.  HE WILL PROTECT HER NO MATTER THE COST TO HIM.  HE HAS SOME OF HIS OWN DEMONS TO FACE IN ORDER TO MOVE ON.  WILL MATT BE ABLE TO SAVE PIPPIN AGAIN?  WILL MATT BE ABLE TO CONFESS HIS LOVE AND FIND HAPPINESS WITH THE ONE WOMAN HE HAS EVER TRULY LOVED?

I REALLY LOVED WINTER KILL.  WHAT AN EXCELLENT READ.  I LOVED ALL OF THE CHARACTERS ESPECIALLY PIPPIN AND MATT.  THEY HAD THIS DEEP CONNECTION AND BOND WHICH NEVER WENT AWAY EVEN AFTER HE RESCUED HER.  IT ONLY DEEPENED WHEN PIPPIN RETURN AND THE CHEMISTRY WAS TRULY AMAZING BETWEEN THEM.  I ABSOLUTELY LOVED MONTY, MATT'S DOG.  HE IS SO ADORABLE AND IT ADDED SUCH A NICE TOUCH TO THE STORY.  MONTY LOVED PIPPIN AND MAKES THE ULTIMATE SACRIFICE.  IF YOU ARE LOOKING FOR A REALLY GOOD BOOK WITH LOTS OF SUSPENSE, MYSTERY, MURDER AND ROMANCE AND AUTHOR THAT WILL KEEP YOU GUESSING WHO THE KILLER IS UNTIL THE VERY END, I HIGHLY RECOMMEND THAT YOU READ WINTER KILL.  YOU WILL LOVE THE BOOK AND WILL NOT BE ABLE TO PUT IT DOWN.  I AM SO LOOKING FORWARD TO READING MORE BOOKS BY LAWNA MACKIE AND THE NEXT BOOK IN THE SERIES. I LOVE HER WRITING.  5 STARS.