Review of The Burning by Susan Squires 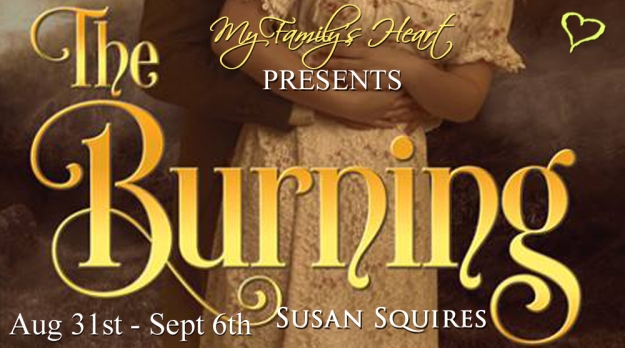 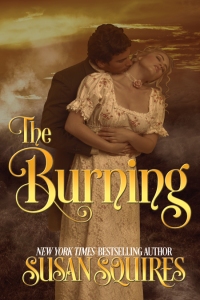 A FORBIDDEN TEMPTATION…
It is 1821 and all who know the beautiful, mysterious Ann Van Helsing believe she is insane. Yet Ann’s curse is the deep psychic ability that shows her everything about another human being—their history, thoughts and desires—simply by touching them. Overwhelmed by a power she can barely control, Ann roams the quiet woods and caves near her estate, searching for an elusive peace. Here she encounters the man who will change everything…

LEAVES HER YEARNING…
To atone for an unforgivable transgression against his own kind, vampire Stephan Sincai has become a vigilante who must hunt and kill those whom other vampires have made. When Ann discovers Stephen bleeding in her cave, she reaches tries to help him. The moment she touches him she knows every fiber of Stephens being—and the knowledge is at once frightening and irresistible…

FOR ETERNAL FULFILLMENT…
Ann and Stephen are drawn together by a powerful force. As they fight against the evil surrounding them, an enemy bent on destroying them will make them choose between what they love and what they fear the most….

GRIPPING AND UNFORGETTABLE...
Romantic Times (4 ½ star review) on The Companion 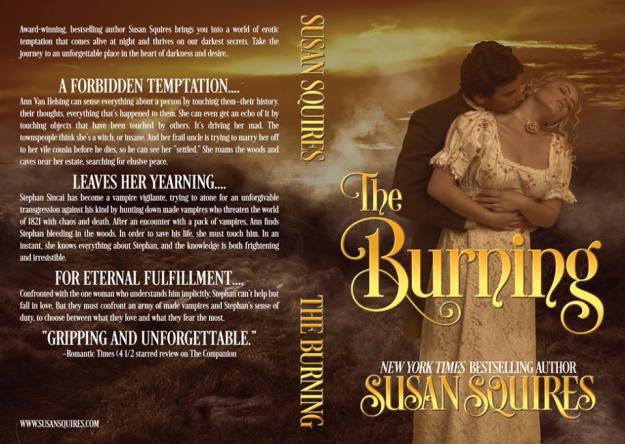 Stephan flung Miss Austen’s novel to the floor. Not that it was not entertaining. It was, even skilled and insightful. But the book he wanted to read was laid out before him in a coma, unreadable. He thrust his hands in his pockets and slumped in his chair.

Her situation irked him, to say the least. What awaited her if she wakened from her coma? She had no parents living, else her uncle would not be her trustee. Now her guardian lay downstairs with a weak heart and a tenuous grip on life. What would happen when even this one person who cared for her was denied her? Van Helsing would return tomorrow. He could keep Van Helsing out of her room, for a while. But if she recovered? With a lout like that in the house, was she safe? And then there was the fact that she was suspected, however stupidly, of murder. Stephan chewed his lips.

Only his sharp hearing would have detected the low moan. His eyes widened in shock. Her eyelids fluttered. He dove from his chair to his knees beside her bed and began to chafe her hand. She moaned a little louder. She was waking! Thank whatever gods you choose, he commanded himself. He would not be spared damnation, but at least his crime against her, whatever it was, might not be irrevocable. She was about to come to consciousness.

He jerked his hands away from hers. She would not like to wake to being touched. A stranger by her side? Not reassuring. Especially one whom she had last seen covered in blood and whirling darkness. But there was no one else. And he could not let her wake alone.

He mustered what he hoped was a reassuring smile.

THE BURNING IS A PARANORMAL VAMPIRE REGENCY ROMANCE   WE ARE INTRODUCED TO STEPHAN AND ANN WHO ARE DRAWN TO ONE ANOTHER BY A VERY POWERFUL FORCE. STEPHAN IS A VERY DETERMINED VAMPIRE WHO IS TRYING TO ATONE FOR THE CRIMES COMMITTED AGAINST HIS PEOPLE.  HE WILL LET NOTHING STOP HIM FROM ACHIEVING THAT GOAL.  ANN HAS A GIFT/CURSE WHICH FORCES HER TO STAY AWAY FROM OTHER PEOPLE.  SHE HAS A DEEP PSYCHIC ABILITY THAT SHOWS HER EVERYTHING ABOUT ANOTHER HUMAN BEING.  ANN CAN SEE THEIR HISTORY, THOUGHTS AND DESIRES SIMPLY BY TOUCHING THEM.  AT TIMES, THIS GIFT BECOME OVERWHELMING TO ANN AND SHE CAN'T CONTROL IT.  ANN IS UNABLE TO LIVE A NORMAL LIFE SO SHE HIDES OUT ON HER ESTATE WITH HER BOOKS AND UNCLE AND LIVES A SOLITARY LIFE.  WHEN ANN FIND STEPHAN BLEEDING IN THE CAVE, SHE TRIES TO HELP HIM.  ONCE SHE TOUCHES HIM, SHE REALIZES WHAT HE IS AND KNOWS EVERYTHING ABOUT HIM.

ANN ACCEPTS WHAT STEPHAN IS AND THEY BOTH FALL IN LOVE.  BUT WILL THE EVIL FORCES THEY FACE, DRIVE THEM APART OR BRING THEM CLOSER TOGETHER?  WILL THEY DEFEAT THE EVIL?

I LOVE ANN AND STEPHAN TOGETHER.  THEY ARE SO MUCH ALIKE WITH DIFFERENT GIFTS WHICH AT TIMES FELT LIKE A CURSE TO THEM.  STEPHAN WAS FILLED WITH SUCH GUILT AND IT WAS SO HARD FOR HIM TO FORGIVE HIMSELF.  HE HAD A HARD TIME BELIEVING THAT ANN LOVED HIM AND WOULD LOVE HIM FOREVER.  ANN WAS A VERY STRONG WOMAN AND DID HER BEST TO LIVE HER LIFE AND NOT LET ANYONE CONTROL HER OR PUSH HER AROUND.  SHE WAS VERY GOOD FOR STEPHAN.  SHE FOUGHT FOR THEIR LOVE AND SURVIVAL.

I LOVED THE DIFFERENT INTAKE SUSAN SQUIRES HAD ON VAMPIRES. IT WAS QUITE REFRESHING AND SO MUCH MORE INTERESTING.  SHE DRAWS YOU INTO THE STORY FROM THE VERY BEGINNING AND KEEPS YOU ON YOUR TOES THROUGHOUT THE BOOK.  SHE KEEPS YOU GUESSING UNTIL THE VERY END WHAT WILL HAPPEN NEXT.  I LOVE THE CHARACTERS AND THE STORYLINE.  I THOUGHT ALL THE CHARACTERS WERE REALLY STRONG AND THE CHEMISTRY WAS THERE.  IF YOU ARE FAN OF PARANORMAL OR VAMPIRES, THE BURNING IS A MUST READ FOR YOU.  I AM LOOKING FORWARD TO READING MORE BOOKS IN THE SERIES.  IT WILL BE QUITE INTERESTING TO SEE WHAT STORY SUSAN SQUIRES COMES UP WITH NEXT.  4 STARS 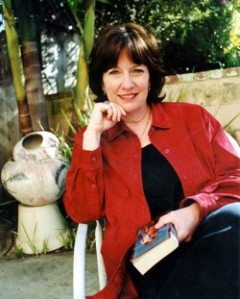 Susan Squires is a New York Times bestselling author known for breaking the rules of romance writing. Whatever her time period, or subject, some element of the paranormal always creeps in. Susan’s work has won multiple contests including the Holt Medallion, the Golden Heart and the Book Buyer’s Best Award and reviewer's choice awards from RT BookReviews. Publisher's Weekly named Body Electric one of the most influential mass market books of 2003 and One with the Shadows, the fifth in her vampire Companion Series, a Best book of 2007. Time for Eternity, the first in the DaVinci time travel series, received a starred review from Publisher's Weekly.

Susan has a Masters in English literature from UCLA and once toiled as an executive for a Fortune 500 company. Now she lives at the beach in Southern California with her husband, Harry, a writer of supernatural thrillers, and three very active Belgian Sheepdogs, who like to help her write by putting their chins on the keyboarddddddddddddddddddddddd.

Release Blitz has been organized by