Review of the Reign of the Vampires by Rebekah R. Ganiere 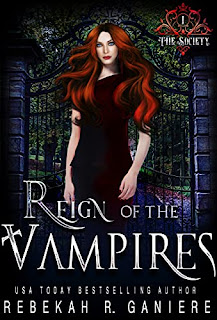 She wants security. He wants freedom. Together their love could destroy the world. Ten years after the Outbreak of the V2000 virus turns the majority of humans into a mutated Vampire sub-species, the last remaining pure humans are the world's hottest commodity. In this new world, it's The Vampires that rule. Independent Danika Chekov refuses to let her father's legacy die. Being the only female Vampire Lord in America isn't easy. Being thrust into the role of CEO of the world's largest synthetic blood company is even harder. But after she's almost murdered, she's forced to purchase a guardian from the slave markets - Mason. Mason is human, or so the Vampires think. Determined to protect his secret at all costs, his plans of escape are thwarted when the beautiful and strong-willed Danika buys him to protect her from an unknown enemy. Their desires threaten everything they both want most. But their passion sparks a love that could change them both forever. Fans of J.R. Ward's Black Dagger Brotherhood and Lara Adrian's Midnight Breed series will love this Hot Vampire Series. Scroll up to One Click now and begin your next Steamy Vampire Romance. Note: This is a Paranormal Romance which includes steamy sex, violence, adult themes.
MY REVIEW:
REIGN OF THE VAMPIRES IS THE FIRST BOOK I HAVE READ BY AUTHOR, REBEKAH R. GANIERE AND DEFINITELY WON'T BE THE LAST. WHAT AN EXCELLENT START TO A NEW SERIES.  I REALLY LOVED THE STORY AND CHARACTERS.  THIS IS NOT YOUR TYPICAL VAMPIRE STORY.   REIGN OF THE VAMPIRES IS VERY WELL WRITTEN WITH A STRONG FEMALE CHARACTER AND LOTS OF TWISTS THAT YOU WILL NOT SEE COMING.  THIS IS A SCARY WORLD WHERE THE VAMPIRE ARE IN CONTROL BUT SOME VAMPIRE LIKE DANIKA ARE VERY KIND AND GOOD TO THE HUMANS. I ENJOYED THE LOVE STORY BETWEEN DANIKA AND MASON.  SUCH STRONG FEELINGS AND CHEMISTRY. WHAT WAS EVEN MORE OF A SURPRISE WAS WHO MASON REALLY WAS. THIS IS A MUST READ FOR FANS OF VAMPIRE STORIES. I CAN'T WAIT TO READ MORE BOOKS BY THIS AUTHOR.  SHE DOES NOT DISAPPOINT.  5 STARS

Biography USA Today Bestselling Author and Screenwriter, Rebekah grew up on both the east and west coasts and currently lives in the Los Angeles area. From the Giving Tree by Shel Silverstein to The Stand by Stephen King, Rebekah has always immersed herself in other people's worlds. She began writing in junior high and then found she liked pretending to be other people's characters in high school. Lettering in drama she went on to study theater in college as well. After college she continued acting until becoming a mom. Ultimately, she ended up going back to writing her characters down instead of acting them out, so she could stay at home with her kids. Rebekah's novel Dead Awakenings, debuted in January 2014 hitting the bestseller list the first day. Her Fairelle Series of Fairytale retellings has won numerous awards as have several of her other books and screenplays. Rebekah is the former President of RWA Fantasy, Futuristic & Paranormal Chapter. In her spare time when she isn't writing, you can find her hanging out with her husband, homeschooling and driving her four children to auditions, violin, parkour, ice skating, dance lessons, gymnastics, fencing, coding classes and more. Or lounging at home with her neurotic German Shepherd, murderous Bearded dragon, three adorable guinea pigs and two lazy tortoises. The escaped snake has yet to be found. Rebekah's favorite pastime is to cosplaying with her family and speak at Comic Cons all over the west coast. Including San Diego Comic Con, WonderCon, Long Beach Comic Con, Salt Lake Comic Con, FyreCon, LTUE, and more. "It's Never too late to be, what you might have been." George Eliot www.RebekahGaniere.com www.Facebook.com/VampiresWerewolvesZombies
Posted by Girl with Pen at 6:00 AM