TWINS
The Dragon's Dove Chronicles, the novella genesis of book 6 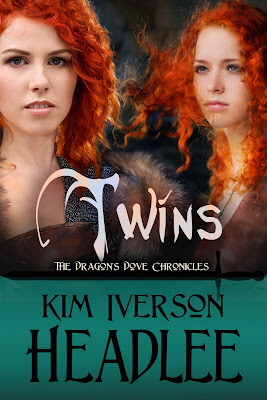 From the award-winning, critically acclaimed pen of Kim Iverson Headlee comes the fall of Camelot as you have never seen it before.

The death of their mother knells the death of any hope for a joyful future for Gyan’s identical twin daughters, Gwenhwyfar and Gwenhwyfach. Their father, Arthur the High King, wastes no time in announcing firstborn Gwenhwyfar’s betrothal to Medraut—the man whom Gwenhwyfach secretly loves. And Gwenhwyfar is in love with Angusel’s son Lannchu.

The twins conspire to defy Fate and trade places. They know how ambitious is their scheme, for Gwenhwyfar is trained in the domestic arts and Gwenhwyfach has chosen the warrior’s path, yet the sisters are confident of success. The wedding and its accompanying night come off without a hitch… for both of them.

Fate, however, shall not be defied.

Incorporating ancient Welsh legends of the “False Guinevere” and “Feasting the Hungry Man,” and featuring many characters introduced in Dawnflight, Morning’s Journey, and Raging Sea, this glimpse into their destiny, thirty years after the setting of those novels, reveals the destruction of Arthur’s realm that’s unique in all of Arthurian literature.

Praise for other Arthurian works by Kim Iverson Headlee:

The bedchamber door opened. A dragon writhed in her stomach. This was the moment upon which all her plans hinged.

Gwenhwyfach summoned a nervous smile for her bridegroom that wasn’t feigned.

Medraut flicked his gaze about the chamber before letting it come to rest upon his bride. “You’ve become more like your sister.” His speech was only a wee bit slurred. The dragon in Gwenhwyfach’s stomach took a leap. He waved a hand in her direction. “Chosen like a true warrior.”

He was right, Gwenhwyfach realized with a mental groan. Defensively, the room offered only two possibilities: near the door for the greatest element of surprise, and near the fire, with a wall to guard her back and a weapon nearby in the form of the blunt but heavy iron poker.

She rose. “Not so, my lord.” She fought to keep her voice low and even, her eyes downcast. “I was cold.” She added a shiver and chafed her arms.

“Ah.” Gwenhwyfach kept her gaze lowered as Medraut approached her. “Perhaps I can be of assistance.”

He unpinned her brooch. The cloak slid from her shoulders to pool at her feet. Gwenhwyfach allowed herself to look up and saw hunger smoldering in her husband’s eyes. She tried to forget that his hunger wasn’t for her. In time, it would be.

TWINS IS A STAND ALONE NOVEL IN THE DRAGON'S DOVE CHRONICLES.  IT CAN BE READ AS A STAND ALONE NOVEL.  IT IS THE STORY OF KING ARTHUR AND GWENEVERE'S TWIN DAUGHTERS, GWENHWYFAR AND GWENHWYFACH.  THE TWINS DECIDED TO TRADE PLACES SO THEY EACH END UP WITH THE MAN THEY LOVE.  THE SWITCH ENDS UP BACKFIRING.

I HAVE ALWAYS ENJOYED THE TALES OF KING ARTHUR AND CAMELOT.  I FIND THE TALES MAGICAL AND VERY ROMANTIC.  KIM DID A GREAT JOB IN THE RETELLING OF CAMELOT. THE STORY WRITTEN REALLY WELL AND SO WERE THE CHARACTERS.  IF YOU LOVE THE TALES OF CAMELOT, THEN I RECOMMEND YOU READ THIS BOOK.  4 STARS

I have to confess, the names were a tangle for me.

But that aside, I never got lost. This is a short but packed full of content delight.

I was shocked many times in this story.

There appears to be a chance for love. Two twins, one experienced with a sword and the other experienced running the castle decide to switch identities so each can have the one they love.

Kim Headless puts so much into her stories. Even this short story is filled with so many court intrigues.

Kim Headlee lives on a farm in southwestern Virginia with her family, cats, goats, Great Pyrenees goat guards, and assorted wildlife. People and creatures come and go, but the cave and the 250-year-old house ruins—the latter having been occupied as recently as the mid-twentieth century—seem to be sticking around for a while yet. She has been an award-winning novelist since 1999 (Dawnflight first edition, Sonnet Books, Simon & Schuster) and has been studying the Arthurian Legends for nigh on half a century.