Promo Tour This Devil is Crazy by Pauline Hornsby

THIS DEVIL IS CRAZY
The Devil's Prophets, book 1 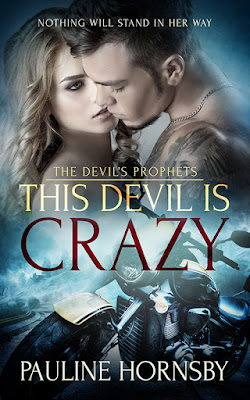 When Jenna Mitchell enters the world of the Devil’s Prophets Motorcycle Club, unlike most women before her, she is not there to land herself a biker. After the late president of the MC, kidnapped their baby and murdered her sister, Jenna could only look on from the sidelines as another woman raised Jack. Now is her chance to finally reunite with her son, and nothing will stand in her way.

Try telling that to Ali, the club’s enforcer. The stunning, quiet bookkeeper is like the start of his favourite sex fantasy, the part just before the secretary whips off her glasses, and shakes down her hair. One short meeting, and she’s all he can think about.

First love at thirty two, seems unlikely, yet Jenna can’t help falling for the sexy, dirty mouthed biker. But it’s not all MC parties and off the chain hot sex for this interloper. When the man that wants you, demands your secrets too, it’s only a matter of time before he will them find out.

I let myself into the office the moment Chrissie left to do the banking. “You settling in?” I said, picking one of the pens out of the stupid penguin holder that Chrissie must have bought.

She appeared skittish and I had no plans to alleviate that. “Maybe.” I slid the pen back into the container. “Funny place for someone like you to work. Did you know it was an MC?”

I waited for her to say no, to tell me that she had no idea that the garage had a link to an outlaw motorcycle club. “I worked it out from the address, so yes,” she said.

“Six weeks. Is there anything else? I’m kind of swamped.”

I reached across and closed the laptop, her perfume hitting me sharply. Roses, unusual when most women around the place smelled of spices and sex. I liked it, though, the aroma lighter, more subtle than I was used to. “Take a break.”

Her eyes went to my mouth like she lip-read me. “I could make coffee,” she said, her hands shaking before she closed them into fists.

“So, where’s Mr. Mitchell?” I asked, her eyes widening in surprise.

“I thought you checked all that out?” Her mouth lifted at one side.

“We did, just wondering if you have one hidden away somewhere.” I leaned closer. “You don’t look single.”

“Not beautiful like you.” I cocked my head to the side. “But you don’t look very content, so you’re either not being fucked properly, or you are on your own.”

Her breath hissed in. “I don’t appreciate that.”

“Being fucked properly?” I didn’t back away, leaning down a little more.

“Being spoken to like that. It’s disrespectful and unprofessional. I’m here to work, not have you come in here and harass me like this.” She rolled her chair back and I held down the chuckle that started making its way up my throat. “I think you should leave.”

“Babe, you don’t get to tell me shit.” I straightened up. Fuck, my dick had been getting hard the entire time I had been talking to her. I had been caught up in the discussion, but still, how the hell had I not noticed?

“I’m just making conversation. Besides, it’s you that’s harassing me.”

“What?” Her eyes grew rounder. Had she noticed? I really hoped so. “I’ve said nothing to you.”

“Yeah, but you’ve been checking me out. I saw you watching me. I’m not an object, you know.” I smiled, softening my words. I’d liked her watching me. Of course, she’d checked out my brothers too. We were probably like animals in a zoo to the pretty little citizen.

“You’re being ridiculous,” she said, her voice wavering. I’d caught her, she couldn’t really deny that.

“It’s okay. I think I like you harassing me.” I scratched my chin. “Yeah, I’ve changed my mind, you can harass me as much as you want.” 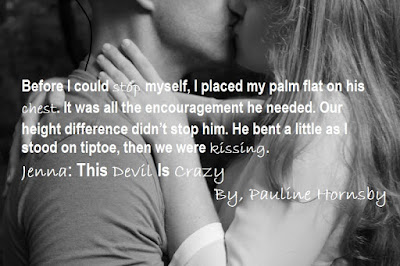 Pauline lives in a quaint country town where she writes, reads, and is lucky enough to, live romance. Having found the love of her life early, she has no issue with her friends reading her stories, and being unable to make eye contact with her for weeks after. It’s all about love, and the trials of finding a happy ever after in her world.