Blurb
Hot. Intense. Relentless.
Rory Cameron is all about rugby. He’s been playing since he
was a wee bairn in Edinburgh. By now, he should be a powerhouse with his
single-minded dedication to the Traverse City Blues Rugby Club. But something
is missing. With his dad breathing down his neck to make a big club, the last
thing he needs is a sassy country girl distracting him.
Grace making the men’s team? Improbable. Rory coaching a
women’s rugby team? Unbelievable. Falling for the girl? Absolutely.
Grace Bowman moves to Michigan to forge a new life without
her family’s constant mothering. She refuses to let her diabetes keep her from
the life she craves. Time to live big and take chances—carpe diem and all that.
Still, the last thing she expects is for things to heat up with the coach of
the women’s rugby team. If her new lifestyle doesn’t kill her, rugby just
might. But Grace is willing to take the chance for a winning try with Rory. 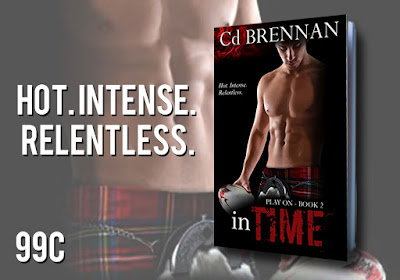 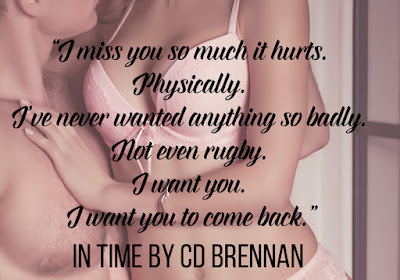 About the Author
Having traveled and lived all over the world, Cd Brennan now
enjoys reliving her glory days by writing about them. Feisty heroines with
wanderlust or sexy rugby heroes who breathe passion for more than just the
sport.
Aussie/Yankee twined, Cd is now settled in Michigan with a
rugby player of her own and two wee sons who are still adapting to the snow. A
full-time editor and mum, she and her hubby still dream of starting a hobby
farm—a few cows or buffalo, maybe some chickens and pigs, too. She loves rugby,
traveling, anything outdoors, and all things from the 80s.
But she especially loves to hear from readers! Find her at
your favorite places.
www.facebook.com/CdBrennanauthor
www.twitter.com/CdBrennanauthor