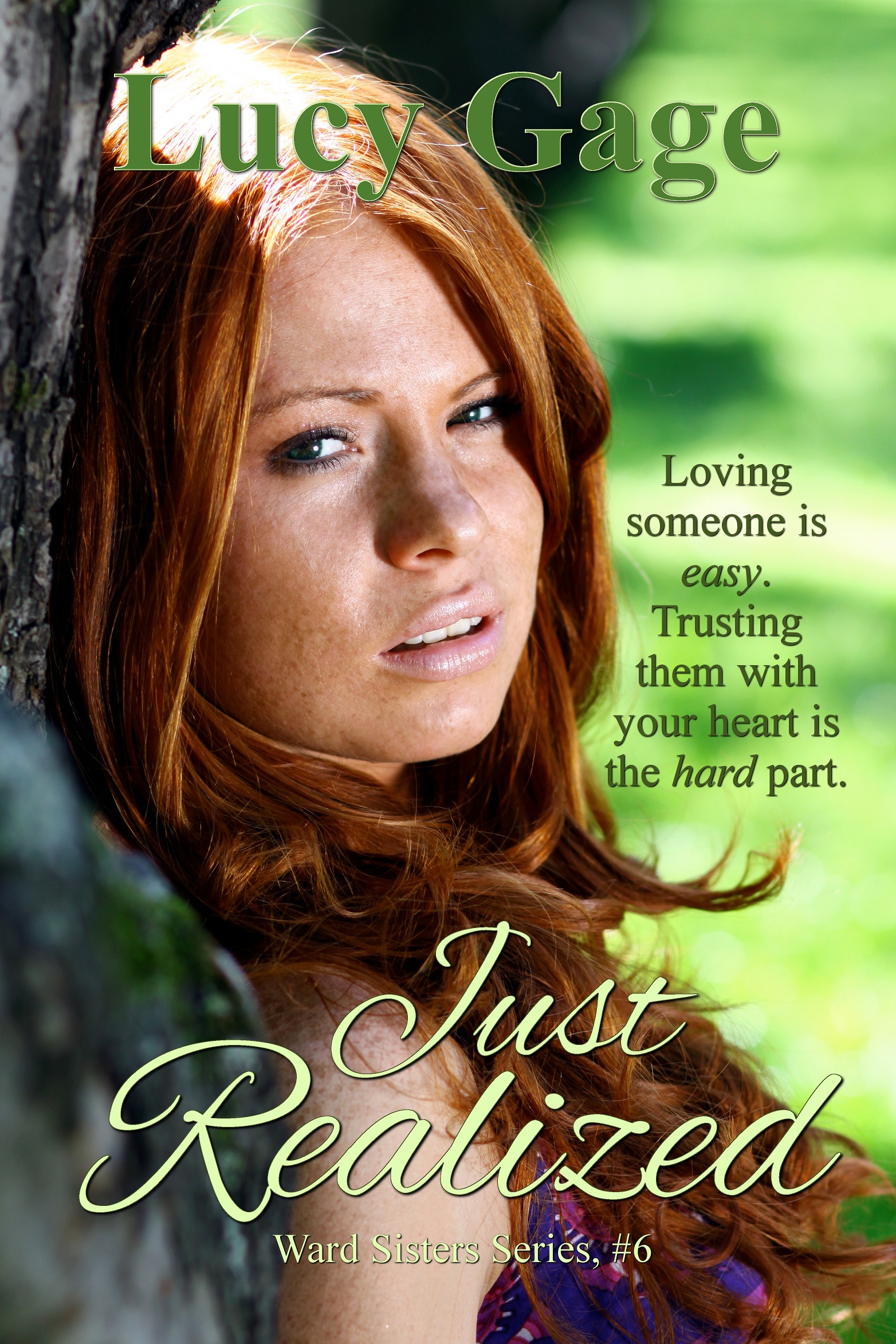 She appears to be the irrepressibly happy girl. Nina Jacobs has had some rough patches in life, and men have always disappointed her. The day Owen Nichols drops into her world, the last thing she expects to happen is happily ever after.

He gravitates toward the role of knight in shining armor for damsels in distress. Sergeant Owen Nichols has a bad habit of being the rebound guy. When he meets Nina Jacobs, he recognizes the moment where preparation meets opportunity.

Some life lessons have to be earned the hard way. Owen is determined to prove worthy of Nina's trust, and they form an unshakable bond of friendship that she can't believe—and he dares not presume—is more. Can Owen find the courage to leap before she rediscovers her heart with someone else? Or will Nina realize that she already has everything she needs with the man who has become her best friend?

This time, he dove in with her still on his shoulder—instead of dumping her—and she was ready for it. When they surfaced, she was laughing and he was, too. He swooped her into an embrace, leaning his face inches from hers.
She tried to pull away and he said, “Don't. Not yet.”
“Why?”
“Because your ex is watching. I'm going to kiss you. Make him jealous.”
“What if I don't want to kiss you?”
“Do you want to make him jealous?” he asked, his lips a hair from hers.
“Yes,” she breathed.
“Then let me kiss you,” he whispered. “Wrap your arms around my neck and your legs around my waist.”
“Why?”
“Just do it.”
He shifted his hands to her butt and pulled her pelvis to his. Heat flooded her body as the hard ridge of him rubbed her aching clit with each passing wave. “Better?” Lust coated his voice.
“Uh huh,” she muttered as he pressed his lips to hers, warm, despite the cold water, and surprisingly soft. When she swiped her tongue over his lips, tasting the ocean salt, he opened them.
His tongue danced with hers as if meant to do so. No war, no fighting, just a sensual give and take. When he pulled away, he'd left her breathless.
“Why'd you stop?” I could kiss you for hours.
He panted. “Did you want to keep going?”
“Yes.” God, yes. I might fly apart, but I don't care.
“Okay.” He kissed her again, his luscious mouth turning her inside out. This time, he let her slide down his body, and a wave nearly toppled them.
“Did that work for you?”
To her delight, his brawny arms still held her. “Which part? Making Liam jealous or getting excited while kissing you?
Owen smiled. “I liked kissing you, too.”

JUST REALIZED IS BOOK 6 OF THE WARD SISTERS SERIES.  THIS IS OWEN AND NINA'S STORY.  I ABSOLUTELY LOVE THIS SERIES.  I HAVE READ ALL THE PREVIOUS BOOKS IN THE SERIES.  I RECOMMEND YOU DO THE SAME THING.  ALTHOUGH, EACH BOOK CAN BE READ AS STAND ALONE, I FEEL YOU WILL GET MORE OUT OF THE STORIES AND APPRECIATE ALL OF THE CHARACTERS.  ALL THE CHARACTERS ARE CONNECTED.  I LOVE HOW LUCY GAGE STARTS IN THE PRESENT AND TAKE YOU BACK IN TIME TO GIVE YOU A FEEL OF WHAT HAS HAPPENED TO THE CHARACTERS BEFORE THEY MET.  IT REALLY GIVES YOU A HISTORY OF THE CHARACTERS AND EVERYTHING THEY HAVE EXPERIENCED AND WENT THROUGH.

I REALLY THOUGHT NINA AND OWEN WERE MADE FOR ONE ANOTHER.  THEY HAD PERFECT CHEMISTRY AND WERE GOOD FOR ONE ANOTHER.  I REALLY THINK NINA AND OWEN WERE ABLE TO HELP THE OTHER ONE HEAL.  NINA WAS SUCH A COMPLEX CHARACTER WHO WAS LOOKING FOR LOVE IN THE WRONG PLACES.  HER FATHER LEAVING HER AND HER MOTHER FOR ANOTHER MAN AND NOT BEING IN HER LIFE DID NOT HELP.  NINA'S HEART WAS BROKEN THAT DAY AND I REALLY THINK IT DIDN'T HEAL UNTIL SHE MEANT OWEN.  ALL HER RELATIONSHIPS WERE REALLY BASED ON SEX.  NINA THOUGHT SHE HAD TO HAVE SEX WITH MEN IN ORDER TO HANG AROUND.  EVERYTHING CHANGES WHEN SHE MEETS OWEN.

OWEN IS THE SWEETEST GUY.  I FOUND MYSELF FALLING IN LOVE WITH THE HANDSOME SOLDIER.  HE IS ABSOLUTELY GORGEOUS AND THE PERFECT GUY. HE ALWAYS PUTS NINA FIRST AND TREATED HER LIKE A QUEEN.  OWEN MADE HER FEEL SPECIAL AND BEAUTIFUL AND THAT SHE COULD BE HERSELF.  HE GAVE HER THE  SPACE SHE NEEDED EVEN THOUGH IT HURT.  OWEN FELL DEEPLY IN LOVE WITH NINA AND WANTED TO BE WITH HER BUT THEY NEEDED TIME TO HEAL.  OWEN WAS THROUGH A LOT OF HEARTACHE TOO AND LOST HIS BEST FRIEND IN WAR.  HE NEVER FORGAVE HIMSELF.  WILL NINA REALIZE HOW SHE FEELS ABOUT OWEN BEFORE IT IS TOO LATE?

JUST REALIZED WAS A VERY ENJOYABLE LOVE STORY FILLED WITH A LOT OF EMOTIONAL  AND HAPPY MOMENTS. I FOUND MYSELF CRYING AND LAUGHING WITH THE CHARACTERS.  I HIGHLY RECOMMEND YOU READ THE SERIES.  YOU DO NOT KNOW WHAT YOU ARE MISSING.  IT IS ONE OF THE BEST SERIES I HAVE READ IN A LONG TIME. I LOVE THE AUTHOR, LUCY GAGE'S WRITING AND I AM LOOKING FORWARD TO MORE BOOKS IN THE SERIES AND ANYTHING ELSE SHE MIGHT WRITE  THIS SERIES IS DEFINITELY A MUST READ.  5 STARS.

Lucy Gage started her writing career under another name, but the same vivid imagination and love of books still fuels her daily life. When she's not writing, you can find her spending time with her family in her home state of Maine, experiencing a life that helps shape her writing.
She loves to hear from fans, and appreciates that they asked about her writing while she took this last year to focus on other parts of her life. Look for her website in 2016. Ward Sisters Series Book #7, Think of Me, will arrive in 2016. Book 1 in the Vega Brothers Series—a Ward Sisters spinoff—launches later in the year.


This event has been organized & hosted by