Review of In Time for You by Chris Karlsen 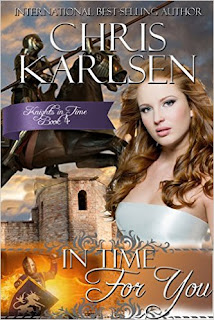 Another book in the exciting, best-selling time-travel romance series, Knights in Time.

While horseback riding in the English countryside, sisters, Electra and Emily Crippen find themselves trapped in a tear in time. Thrown back to 1357 England and caught by a local noble, they are in a place that is home but as frightening and unfamiliar as an alien world would be. With no idea how the tear in time came about, the one thing they do know is: they must stay together and stay near to where the event took place in hopes of discovering the way back to their modern life. That certain need to stay together is the first certainty taken from them when one sister is forced to remain in England and one is sent miles away to Wales by royal order.

There is one other hope for help the sisters don’t know exists. It’s Electra’s lover, Roger Marchand. A time traveler himself, he never told her of his past. When he realizes what has happened to the sisters, he enlists the help of a scientist friend to help him open the suspected passageway through time. Any effort to save Electra and Emily will likely cost him his life. This was the time Roger came from, a time when his country, France, was at war with England. If he is discovered on English soil while searching for the sisters, he will either be killed or taken prisoner of war. Any risk is worth saving the life of the woman he loves.

IN TIME FOR YOU IS BOOK 4 IN KNIGHTS IN TIME SERIES.  EACH BOOK IN THE SERIES CAN BE READ AS A STAND ALONE BUT I HIGHLY RECOMMEND YOU READ THE BOOKS IN ORDER.   YOU WILL GET MORE FROM THE SERIES IF YOU READ IN ORDER SINCE ALOT OF THE SAME CHARACTERS APPEAR IN THE STORIES.  THIS IS ELECTRA AND ROGER'S STORY AND ALSO EMILY'S STORY.

ELECTRA AND EMILY ARE TRAPPED IN A TEAR IN TIME WHILE HORSEBACK RIDING.  ROGER, ELECTRA'S LOVE WILL DO ANYTHING TO BRING THEM BACK.  WITH THE HELP OF HIS FRIENDS AND SCIENTIST, HE TRAVELS BACK IN TIME TO FIND THE SISTERS. ALONG THE WAY THEY STUMBLE UPON MANY OBSTACLES IN FINDING THE SISTERS.  MEANWHILE THE SISTERS ARE TRYING TO ADJUST TO THE TIME PERIOD THEY ARE IN.  AT FIRST, THE SISTERS DO NOT BELIEVE BUT LATER COME TO REALIZE THEY MIGHT BE STUCK IN THIS TIME PERIOD FOREVER.

ELECTRA AND EMILY ARE DIFFERENT AS NIGHT AND DAY.  I ABSOLUTELY ADORE BOTH SISTERS.  I LOVE THEIR PERSONALITIES.  BOTH SISTERS WERE SPECIAL IN THEIR OWN WAYS.  I LOVED HOW THEY WORKED TO ADJUST TO THEIR TIME PERIOD AND STILL HOLD OUT HOPE THAT ROGER WOULD FIND THEM.  I THOUGHT THEY WERE BOTH LIKABLE CHARACTERS AND THEIR PERSONALITIES DREW IN THE REST OF THE CHARACTERS.  IT WAS VERY ENJOYABLE WATCHING THEM DEVELOP IN THE NEW TIME PERIOD AND WATCHING EMILY FALLING IN LOVE WITH ONE OF THE KNIGHTS.  WHEN THE SISTERS ARE SEPARATED, IT WAS SO HARD FOR BOTH OF THEM TO BE A PART.  YOU COULD FEEL HOW CLOSE THE SISTERS WERE IN CHRIS' WRITING.

I LOVED WATCHING ROGER AND HIS SCIENTIST FRIEND TRAVELING TOGETHER.  IT WAS NICE WATCHING THEIR FRIENDSHIP DEEPEN AS THEY FACED MANY OBSTACLES IN THEIR QUEST TO FIND THE SISTERS.  WILL ROGER FIND THE SISTERS IN TIME TO RETURN TO THEIR OWN TIME PERIOD?

I HIGHLY RECOMMEND YOU READ THIS SERIES IF YOU ARE LOOKING FOR A GOOD TIME TRAVEL ROMANCE FILLED WITH MYSTERY AND SUSPENSE.  EACH BOOK IS DIFFERENT WITH WONDERFUL CHARACTERS.  YOU WILL FALL IN LOVE WITH EACH STORY AND ALL THE CHARACTERS.  I LOVE READING STORIES ABOUT TIME TRAVELLING, ROMANCE, SUSPENSE AND KNIGHTS.  I LOVE HOW CHRIS COMBINES ALL THESE IN ONE SERIES.  THIS SERIES IS A MUST READ.  YOU WILL NOT REGRET IT.  4 STARS 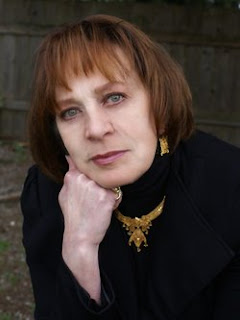 Chris Karlsen is a retired police detective. She spent twenty-five years in law enforcement with two different agencies. The daughter of a history professor and a voracious reader, she grew up with a love of hisotry and books.
An internationally published author, Chris has traveled extensively throughout Europe, the Near East, and North Africa satisfying her need to visit the places she read about. Having spent a great deal of time in England and Turkey, she has used her love of both places as settings for her books. "Heroes Live Forever," which is her debut book, is set in England as is the sequel, "Journey in Time," the third is "Knight Blindness." They are part of her Knights in Time series. All three are available as a boxed set on Kindle. She is currently working on the fourth in the "Knights in Time," series. "Golden Chariot," is set in Turkey and the sequel, "Byzantine Gold" is set Turkey, Paris and Cyprus. They are part of her Dangerous Waters series.

Her most recent release is called, "Silk" and is book one of a new series, The Bloodstone Series. It is a suspense set in Victorian London.
Published by Books to Go Now, her novels are available in digital, ebook, and Android App. and in paperback. "Heroes Live Forever" is also in audio format.

A Chicago native, Chris has lived in Paris and Los Angeles and now resides in the Pacific Northwest with her husband and four rescue dogs. A city girl all her life, living in a small village on a bay was a interesting adjustment. She'd never lived anywhere so quiet at night and traffic wasn't bumper to bumper 24/7.
Some of Chris's favorite authors are: Michael Connolly, John Sandford, Joseph Wambaugh, Stephen Coonts, Bernard Cornwell, Julia Quinn, Julie Anne Long, Deanna Raybourne and Steve Berry.
Posted by Girl with Pen at 6:00 AM