Name of cover designer: JC Clarke via The Graphics Shed 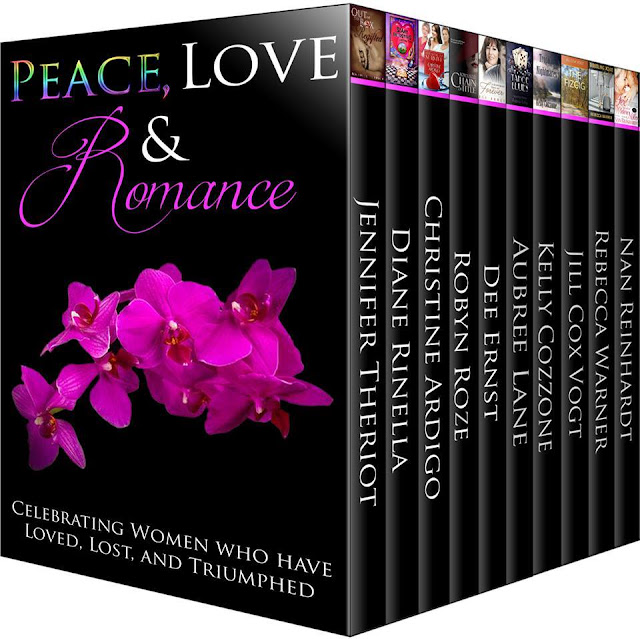 For a limited time, ten of today's hottest and bestselling authors bring you Peace, Love & Romance - a collection of full-length novels (some sweet, some sizzling!) all celebrating women who have loved, lost, and triumphed.

Out Of The Box, Regifted – Jennifer Theriot (Amazon Bestselling Author)


With a new beginning on the horizon for Olivia and Ash, what could possibly stop them from finding their happily-ever-after? In the midst of joy, this blended family finds they have to trust in love and family bonds to get them through what is coming next...or self-destruct. How long can Ash keep parts of his life hidden from those who love him?


Rosalyn is ridiculed for her eclectic wardrobe and unconventional music collection. Niles’s offbeat character is her perfect complement. Sadly his flaws equate to relationship suicide. When Niles learns he can overcome his obstacles by helping the ghost of deceased rock deity Peter Lane avenge murder, how far will he go to secure Rosalyn’s heart?


Cheating to Survive weaves the story of three Norlyn Plains Hospital coworkers and their seemingly perfect lives. However, their marriages are anything but ideal. When they decide to cheat on their husbands, will they find happiness or be destroyed by the consequences? Christine Ardigo handles infidelity realistically and humorously. It will resonate in some way with every woman on the planet.


Newly divorced Shayna wants adventure, and Sean wants her. But the revelation of her ex-husband’s dirty secret sets off a chain of events with deadly consequences that reveals who Sean really is and leaves Shayna to question how well she knew either man. Robyn Roze weaves a story of love, loss, betrayal, and ultimately forgiveness.

Michael is a hot, young rock star. Diane is a single mom almost twenty years older. When they meet, the attraction is immediate. He knows she’s the real thing. She can’t ignore her feelings for Michael, but can’t see past their differences. A Different Kind of Forever is about two complicated people finding—and trying to hold on to— love.

When Cara finds the glitz and glitter of casino life isn’t what it’s cracked up to be, she divorces her husband, finds a new love, a new home, and new piece of jewelry around her ankle. Under house arrest for a crime she didn’t commit, Cara must rely on a zany group of misfits to help set her free.

The tranquil life David Murphy and Tiana Alexander built on St. Lucia is threatened by the dangerous and vengeful Robert Dubose. Can they survive his lust for revenge, or will his secret partner succeed where he failed? Can their love survive, or will it be the final casualty?

Daisy Young believes that when life hands you lemons, eat chocolate and get on with it, but no amount of candy gets her mind off her drowned fiancé—until she flees to East Tennessee’s mountains and meets a man with a dark, secret past.

Lexi Avery asks, "Why does it have to come down to choosing just one man, when no one man can give me everything I want?" Why indeed? Follow her tantalizing adventures as she explores love's options.

Julie is anticipating an idyllic retirement with her husband, Charlie, when he dies suddenly. She meets a younger man, Will, and embraces life—and sex—again. But a dark secret reveals her perfect marriage may have been a lie. Jules goes in search of the truth and finds there’s always a second chance for love. 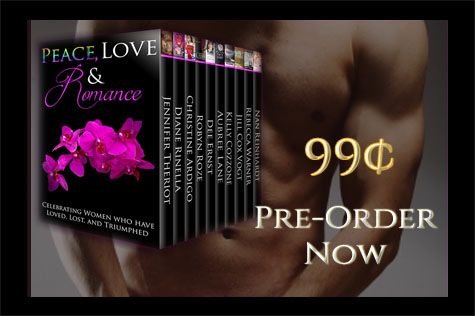 Jennifer Theriot - Jennifer Theriot hails from the Great State of Texas. She is a career woman, working as CFO of a Texas based real estate investment firm by day and does her writing at nights and on weekends. In her limited spare time, Jennifer enjoys being outdoors; preferably somewhere on a beach curled up with a good book. Spending time with family and friends, listening to music, watching a baseball game and enjoying a good bottle of wine are usually on her to-do lists. She’s mom to three grown children and ‘MiMi’ to three grandkids – all of whom she adores!

Diane Rinella - Enjoying San Francisco as a backdrop, the ghosts in Diane’s 150-year old Victorian home augment the chorus in her head. With insomnia as their catalyst, these voices have become multifarious characters that haunt her well into the sun’s crowning hours, refusing to let go until they have manipulated her into succumbing to their whims. Her experiences as an actress, business owner, artisan cake designer, software project manager, Internet radio disc jockey, vintage rock n’ roll journalist/fan girl, and lover of dark and quirky personalities influence her idiosyncratic writing.

Christine Ardigo - I’m a registered dietitian/personal trainer who writes Women's Fiction novels in my spare time. When weight lifting, rock climbing, white-water rafting, and jumping out of airplanes wasn’t enough, I decided to fulfill a dream I had as a child: to write a book.


I’ve lived in New York my entire life and can’t imagine living anywhere else. I have the beaches, the bay and the city, all a half hour away. I’ve built memories here with my husband, two silly daughters and a bunch of crazy friends, all whom I love very much.

Robyn Roze - Robyn Roze lives amongst the cornfields of the Midwest and telecommutes as an accountant. Her passion is writing romantic women’s fiction with enough steam to fog a Kindle screen. Writing was a childhood dream of Robyn’s. She won creative writing awards as a girl and teachers encouraged her to pursue it as a career. Robyn’s stories contain one key element that her readers love: a strong, independent heroine.


When she’s not spending time with her fictional families, she loves to spend time with her real one: her high school sweetheart, their two moody teenagers, and a pampered rescue mutt.

Dee Ernst - Dee always wanted to be a writer, but life kept getting in the way. Finally, in her forties, she thought it was time to give writing a real shot. After many rejection letters, she self-published Better Off Without Him. A Different Kind of Forever was released in April of 2012. In the spring of 2013, she signed with Montlake Publishing and launched her third title, A Slight Change of Plan, that fall. Better Than Your Dreams was self-published in August, 2014. Dee finds a lot in common with all her heroines, including living in New Jersey.

Aubree Lane - Aubree Lane lives in the beautiful foothills of Northern California with her husband, two wonderful sons, and a super special peek-a-poo, named Tanner. When not managing the pooper-scooper, Aubree enjoys warm sand, hot sun, and the cool waters of the Pacific.


Her motto: Write Until Your Butt Hurts, and Your Eyes Are Crossed.

Kelly Cozonne - Kelly Cozzone was born in New Martinsville, WV. After spending 15 years in Myrtle Beach, SC, she finally made it back to her adopted hometown, Austin, TX. In addition to being an author, Kelly writes for ‪Examiner.com and shares her thoughts and stories that strike a chord in her on her blog. She is a member of the National Association of Professional Women. When Kelly isn't writing the mystery stories she loves, she is following her beloved Texas Longhorns. An avid football fan, she spends her fall months rooting on her favorite teams.

Jill Cox Vogt - Originally from the mountains of Tennessee, Jill Cox Vogt has published poetry in literary journals, including Appalachian Heritage, and won top honors in national poetry and short story competitions. While she never set out to live throughout the United States, from Florida to Montana and several places in between, she’s chalked it up to the gypsy in her soul. Her adventures were worth it, but she landed in Louisiana with her husband and dog where she enjoys swimming, chocolate, and books.

Rebecca Warner - Upon moving to Miami after college, ‪Rebecca Warner found herself competing for equal position and pay in the male-dominated banking world. She chose to project femininity and confidence, and to "hit 'em with her smarts," which proved to be a successful strategy. Consequently, her stories are built on the tenets of sexy, feminine and smart women who pursue what they want in love and life, without fear or apology. She and her wonderful husband of 27 years now live in the beautiful mountains of North Carolina with their two rescue dogs.


Nan Reinhardt - Nan Reinhardt is a writer of romantic fiction for women in their prime, who for the last 20 years, has earned her living as a freelance copyeditor and proofreader. But writing is Nan’s first and most enduring passion. She can’t remember a time in her life when she wasn’t writing—she wrote her first romance novel at the age of ten and is still writing, but now from the viewpoint of a wiser, slightly rumpled, menopausal woman who believes that love never ages, women only grow more interesting, and everybody needs a little sexy romance.