Crossing the Line by Michelle Shriver 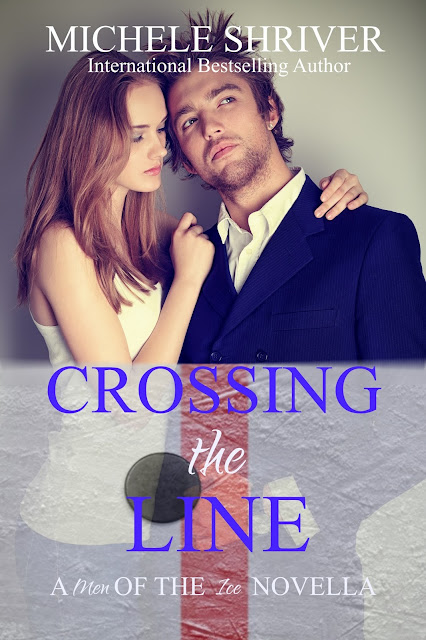 The bestselling Men of the Ice series, featuring the players of the San Antonio Generals hockey team, continues with Crossing the Line.


Nikolai Brantov left his homeland of Russia at the age of nineteen to pursue his dream of playing in the NHL. As the first-ever draft pick of the San Antonio Generals, Nik wants to justify the team’s faith in him Adapting to a new country and culture and learning a new language take up most of his off-ice time, and he doesn’t needed any added complications, especially from the team owner’s beautiful daughter.


Hailing from one of the wealthiest families in Texas, Meryl Johnson should have everything she wants. But money doesn’t buy happiness or her father’s affection. Even though she’s been warned that the player’s on the team are off limits, a new community project puts Meryl in regular contact with the budding Russian superstar, and that’s exactly the way she likes it.


When sparks fly between Nik and Meryl, her father sets out to remind them who is in charge—of both the hockey team and his family. Can the young couple triumph over his manipulations, or will falling in love spell the end of Nik’s time in San Antonio? 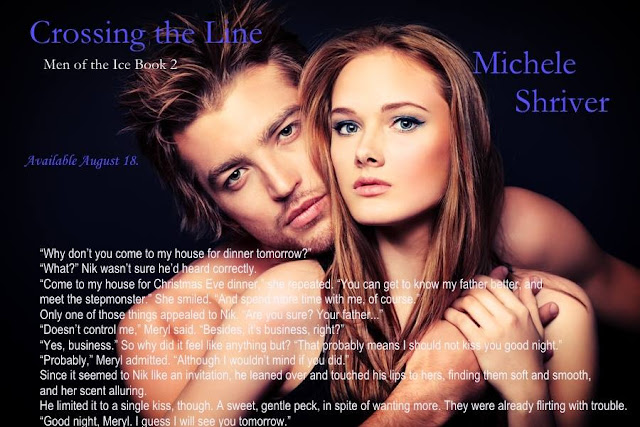 
Nikolai Brantov knotted his tie and ran his fingers through his damp hair, trying to spike the top exactly the way he liked it. When he first moved to the United States from his native Russia five months before to realize his dream of playing in the National Hockey League, he not only had to learn a new language—one he still struggled with—he had to learn new customs and traditions too. Among those were the expectations of being a player in the NHL, including the team dress code which left Nik primping more in front of a mirror as he prepared to leave the arena after a game than he might to get ready for a date. Not that he had any time for dating. Practice, games and English lessons filled most of his days, and that suited Nik fine. He’d left his family and his homeland at the age of nineteen to move to North America to play hockey, not meet women.


“Great game tonight, Nik,” the team captain, Colton Tremblay, said as he came up beside Nik.


Nik nodded at Colton. “Thanks. You too.” The San Antonio Generals beat the Winnipeg Jets three to two in overtime, and Nik scored the winning goal. His first season in the NHL, and the expansion Generals’ first season in the league, were both going well. The country might be unfamiliar, and the rink sizes a little different, but hockey was still hockey, and on the ice was where Nik felt most at home.


“You’re going to stop by the foundation table to see how the toy drive went, right?” Colton asked.


“Yes.” Nik would because he knew it was expected of him. It was almost Christmas, and the Generals’ charity foundation sponsored a drive to collect toys for needy children. Many of his teammates, included Colton, were excited about the event because their girlfriends and wives had helped organize it. Being single, it was less of a big deal to Nik. Still, as much as he would feel completely out of place, it was an important team event and Nik was expected to show up, even if only briefly.


Nik nodded and they left the locker room together. Of course, Colton was anxious to see his girlfriend again. With no one there waiting for Nik to greet him with a kiss and congratulate him on a good game, he planned to make a quick appearance—the minimum expected of him—and head home. Such that it was. ‘Home’ to Nik right now meant staying with a host family in San Antonio while he acclimated to his new city and new country.


Sure enough, as they approached the Generals Foundation charity table, Colton’s girlfriend came over gave him a kiss on the cheek. “Nice game, as usual,” she said, then nodded in Nik’s direction. “You too.”


“The toy drive was a huge success,” Maya continued. “Come see everything we collected.” She led the way to the boxes of children’s toys. She wore a maroon and silver Generals jersey with Colton’s name and number on the back. A group of women surrounded the table, similarly dressed to support their player.


“Hey Nik, is there something you’re not telling us?” Colton asked, as his eyes darted to a young woman in the group.


Nik recognized her as Meryl Johnson, the daughter of the Generals team owner. They’d never formally met before, although Nik had seen her at a couple of team events. His impression of her was that she was spoiled and liked to get her way, but that probably wasn’t unusual from the daughter of a billionaire. And maybe it wasn’t fair to judge someone he’d never so much as exchanged a word with. She was attractive, that was for sure, and he liked her casual style, with her long brown hair pulled back in a ponytail and tucked through a ball cap sporting the Generals logo. which featured the team name in a circle around the Alamo facade, with three stars underneath. She, too, wore a team jersey, and it took Nik a moment to realize what Colton referred to. The jersey Meryl wore was Nik’s.


Before he could answer Colton that he had no idea what it was about, Meryl approached him. “Hi there. I don’t think we’ve ever been introduced,” she said, extending a hand. “I’m Meryl Johnson.”


He said it as if he thought she might not know his name, and Meryl appreciated his unassuming nature. So many of the athletes she’d encountered had big egos, and Nikolai had every reason to as well. The hockey season might be only a few months old, but the young Russian had already made an impression on the league. Sports reporters remarked every day that Nik was a superstar in the making.


Meryl smiled at him. “I know who you are.” After all, her father owned the team, and Meryl made it her business to know about the players he employed. And why shouldn’t she? Hockey players were hot, and in Meryl’s estimation, none more so than Nikolai Brantov, with his gray eyes and spiked brown hair that Meryl longed to run her fingers through.


She’d noticed him during the summer’s NHL draft, when he became the first-ever draft choice of the San Antonio Generals. He appeared awkward in his early interviews, and a little overwhelmed, immediately intriguing Meryl. Was that his true personality, or a byproduct of the circumstances he found himself in? It couldn’t be easy moving to a new country and having to learn a new language at the age of nineteen.


From that moment, Meryl wanted to learn as much about him as possible, so she sought out all the information she could. She knew Nik hailed from the Siberian city of Irkutsk, that his favorite color was orange, and he liked to eat steak and baked potatoes. He listed the Pittsburgh Penguins as his favorite NHL team and his countryman, Evgeni Malkin, as his favorite player. And even knowing all of that, Nik remained an enigma to Meryl.


“I’m wearing your jersey, after all,” she said, and did a little twirl so he could see his name and number, forty-four, on the back. Her choice of attire had raised a few eyebrows among the wives and girlfriends’ who’d put together the event, and who proudly sported their man’s jerseys, but Meryl didn’t care. Her father owned the team, she could wear whatever she wanted.


He was so cute in his uncertainty. Meryl knew he had a tutor working with him on his English, a job she would have gladly volunteered for. In fact, she had, only half-jokingly. Not surprisingly, Daddy had vetoed that idea and warned her that Nik, and everyone else on the team, was off-limits to Meryl. “That’s me. Bold,” Meryl said.


“It looks nice on you,” Nik said, causing Meryl’s heart to flutter a little.


“Better on you, I think. Especially when you scored the winning goal.”


Nik shrugged. “I was in the right place and got a good pass from Colton.”


Definitely unassuming, Meryl decided. And hot. She kept going back to that one. Damn her father and his silly prohibitions. He never wanted her to have any fun. “What are you doing tonight?” she asked. “I have to help put this stuff away,” she gestured to the boxes of toys they’d collected during the charity drive, “then my dad is having a little party up in his box, if you want to join me.” He’d already called her bold. Meryl figured she might as well live up to it.


Nik hesitated before answering, giving Meryl hope that perhaps he’d seriously consider the offer, but the hope was dashed when he shook his head. “No, thank you. I need to go home.”


Meryl knew ‘home’ to Nik was a family of strangers hosting him in their house, and she questioned his need—or desire—to rush back there, but she didn’t press the issue. “Have a good night, then. It was nice to meet you.”


She watched him walk away, admiring how his perfectly-tailored suit fit his body. Okay, he hadn’t accepted her invitation. Meryl hadn’t really expected him to. At least they’d shared a few words, finally. The rest would happen in due time. Meryl was accustomed to getting everything she wanted, and she’d already decided she wanted Nik Brantov.

The official website of the San Antonio Generals. The Generals are a fictional NHL expansion franchise based out of San Antonio, Texas and featured in the Men of the Ice series by author Michele Shriver.


The Men of the Ice books are contemporary romance novellas about the Generals players and the women who love them.


More information about the books, as well the team, organization, and news and events can be found on this site.


Visit the official Facebook page of the San Antonio Generals. The Generals are a fictional NHL expansion franchise based out of San Antonio, Texas and featured in the Men of the Ice series by author Michele Shriver.

Michele Shriver writes women’s fiction and contemporary romance. Her books feature flawed-but-likeable characters in real-life settings. She’s not afraid to break the rules, but never stops believing in happily ever after. Michele counts among her favorite things a good glass of wine, a hockey game, and a sweet and sexy book boyfriend, not necessarily in that order.