Getting to know the authors of Red Ridge Series

GIRL WITH PEN WELCOMES SARA DAILEY AND STACI WEBER TO THE BLOG. THEY ARE THE AUTHORS OF THE RED RIDGE SERIES. 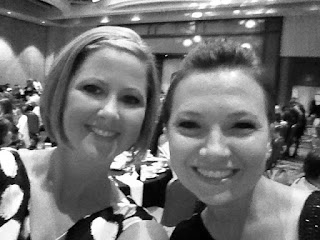 It has been said at more than one professional development workshop that junior high teachers are either extremely patient people or extremely CRAZY people. Both may be true, but we wouldn’t want to teach any other age group. There is nothing better than a little teenage drama to make your workday fly by, and seventh and eighth graders are never short on drama. There are so many things, as teachers, that we hope we have taught our students over the years, but this is about what they have taught us.

One thing that will absolutely kill a young adult novel is a voice that sounds, well fake. We have read so many YA books over the years that were good, but could have been great. The problem was that their characters acted and sounded like they were in their thirties. Teenagers are not complex creatures. (Sorry Guys!) They like to sleep, eat, hang with their friends and sleep again. Making teenage characters over-complicated is a huge mistake in our book.
Being surrounded by teenagers from 8:00 in the morning until 4:30 in the afternoon, five days a week, 180 days a year can have an affect on a person. It becomes almost second nature to be able to think like a teenager. Even their slang and mannerisms seep into you and come out when you least expect it. This is not necessarily a good thing all the time, but when you write YA novels it can come in handy.

We know that we will never be known as literary geniuses by any means and that’s not really the kind of writers we want to be, but it’s really hard to deny that our writing is honest and authentic. We love that our characters behave like the teenagers they are. They come across as being real and honest. Let’s face it teenagers are flawed. They make mistakes. They tell it like it is without holding anything back.

But what’s great about teenagers is that they are very forgiving and super resilient. They don’t take themselves too seriously and most have the amazing ability to laugh at themselves. Adults should be so lucky! It’s all of these traits that make teenagers the ultimate characters.
We write stories for teenagers, about teenagers because we love too. It is what we know best. So when we read a review that compliments our authentic writing voice, we consider that one of the highest praises we could ever receive.

It was October 2007 when we first sat down at a small round table outside of our local Starbucks. We thought we were prepared with a laptop, a notebook, a pen, and an idea. We used to meet on Friday or Saturday evenings and write together. Just two ladies, one notebook, and one laptop to share. We must have looked incredibly silly.

One night we were writing our first-ever BIG make out scene, and it literally took us all night to write that one little part of the chapter because we kept giggling like a couple of school-girls. The entire scene was funny to us. Our hero was an angel, and for some reason, the idea of this angel and this seventeen-year-old girl getting all hot and heavy was simply hilarious. We will spare you all the dirty jokes that came from that night (we are classy ladies after all, but we will post one on our Facebook page if you “like” it). Needless to say, not much was written on days like that, but we were able to finish the novel in about a year. Since that night, so much has changed in our lives with regards to our writing.

Our first novel, Sinful, was released in November of 2010. We immediately began working on our next, which after many name changes became Pack of Lies. It took a year to find a home for Pack of Lies, but as soon as we did, the real changes began. The Red Ridge Pack series was born and so were the deadlines. Not having a year to write a single book, now we do most of our writing on our own, saving our Friday or Saturday meeting time for planning and plotting. Probably the biggest thing that we have learned since becoming published authors is our need to have a thorough outline. Since we don’t write together much anymore, having a clear plan on where the novel is going is essential. For us, we even need to break it down further and have a chapter by chapter summary of what is to take place.

As it stands right now, we have four novels in the Red Ridge series, a short story prequel to Pack of Lies, Sinful, and a short story. If someone were to have told us back in 2007 that we would seven titles out, we would have laughed just as hard, and just as much as we did that night when the joke, “I’ll show you my wings, if you show me yours” was born. Oops! 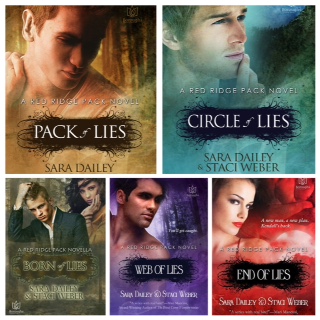