Vanity in Dust by Cheryl Low

Cheryl Low might be an Evil Queen, sipping tea and peeping on everyone from high up in her posh tower—a job she got only after being fired from her gig as Wicked Witch for eating half the gingerbread house.

…Or she might be a relatively mundane human with a love for all things sugary and soap opera slaps.

Find out by following her on social media @cherylwlow or check her webpage, cheryllow.com. The answer might surprise you! But it probably won’t. 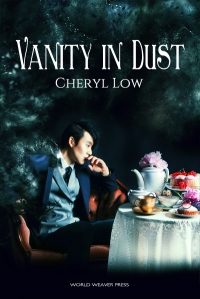 In the Realm there are whispers. Whispers that the city used to be a different place. That before the Queen ruled there was a sky beyond the clouds and a world beyond their streets.

Vaun Dray Fen never knew that world. Born a prince without a purpose in a Realm ruled by lavish indulgence, unrelenting greed, and vicious hierarchy, he never knew a time before the Queen’s dust drugged the city. From the tea to the pastries, everything is poisoned to distract and dull the senses.  And yet, after more than a century, his own magic is beginning to wake. The beautiful veneer of the Realm is cracking. Those who would defy the Queen turn their eyes to Vaun, and the dust saturating the Realm.

From the carnivorous pixies in the shadows to the wolves in the streets, Vaun thought he knew all the dangers of his city. But when whispers of treason bring down the fury of the Queen, he'll have to race to save the lives and souls of those he loves.

“A deliciously decadent debut that will make you reconsider the world within which we live – because how different are we than Low’s drugged-up citizens of the upper crust?” -- Sara Dobie Bauer, author of the Bite Somebody series

Building the world of Vanity in Dust

Vanity in Dust is a dark fantasy about a city of magic users and abusers under the thumb of a queen so feared that she doesn’t even have to come out of her tower to keep them in check. The Realm is a dangerous place. The drug of choice, dust, is called into question as bad batches have driven people mad. The Queen is frequently sending out her wolves to chase down anyone she considers a traitor and drag their souls back to her. And flesh-eating pixies gather in the shadows waiting for a chance to bite a chunk out of the nearest body.

Coming up with this world was an obsession of mine. I left it stewing in the back of my mind for years while I did other things, jotting down notes until it finally came together. I tell people that I’m an expert on nothing but the things I make up, and I mean it. It’s important to be an expert on your own story. I know how the Realm works, the social structure, the bad areas of town, and the secrets. I even made sure I knew what was outside the city, because whether it was a fantasy world or our world would ultimate effect how the Realm had become a city separated from everything else.

I asked myself endless questions about how the world worked. I considered everything I saw in real life and tried to decide how it would work in the Realm—if it would exist at all—and how it would be perceived by the different districts of the city.

Building the world and answering all those questions helped me figure out where the story would go over the course of the series and what had led these people to this breaking point in their society.

One of the funnest parts of building a world, is knowing all its secrets and where it’s going.

The Realm and the people in it are deeply divided by social hierarchy. The aristocracy live at the heart of the city, around the Queen’s Tower. They’ve lost all purpose, eternally young and seeming to rotate through the same scandals and gossip. They play games of pretend in a Library where no one reads but everyone whispers, and at dinner parties where no one is ever hungry but every course is made of sugar.

Unbeknownst to them, their city is about to take the first turn into a storm of change.

Grayc snatched a book from a table as she passed and swung it against the back of Vaun’s skull. The impact echoed in the room a moment before the scrape of chairs and chorus of alarmed voices drowned it out. She waited as Vaun’s head turned toward her, clutching the novel like a weapon or a shield, bracing herself as the full weight of his rage settled on her. Black consumed his eyes like ink spilling from a bottle, blooming in his whites before saturating them completely. “Grayc,” he growled.

“Madness is no excuse for bad manners or wasted tea.”

“Drink bad dust? In Belholn Main district teahouses, perhaps?” She arched an eyebrow. “No, a fine prince of the Realm would never be so foolish. A prince would never overconsume without giving his body a chance to rest between highs. Surely a prince would know better.”

“If you think that is true, then perhaps I did not hit you hard enough.” Her voice rose with a spike of anger.

The prince’s hand drew back but before it could sail she spoke again.

“Swords or guns, your highness?”

“For our duel,” GraycIllan said. “Would you rather I shoot you, or stab you?”

His lips curled back into a snarl that twisted at the corners of his mouth. “You cannot challenge me, Grayc. I am a prince of the Realm. You are just a rat.”

She felt the entire room watching her but his blackened eyes weighed on her nerves the most, urging her to abandon her pretense of confidence and beg for mercy. It was not an option. His madness would only worsen the longer they allowed him to continue sucking down cups of tea. With a lazy shrug she tossed the book onto the table, ignoring the way the porcelain suffered and more tea spilled. “Vaun—” She used his given name and heard the intake of shock-stricken breaths. “—if you are frightened, you only need say so.”