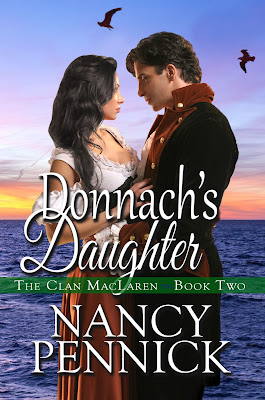 Glynis MacLaren longs to see the world, not get married and live a suffocating life in Scotland. She leaps at the chance to escort her sister to the colonies. She soon finds out the larger world is just as constraining for a woman. People expect her to marry and follow certain protocol. Then she meets the ship’s captain. He stirs feelings in her that she never knew she had. The trip across the ocean is filled with the adventure she sought, love she didn’t expect and a sudden heartbreak when the journey ends.

“A good evening to you, madam,” Captain Aaron Redding addressed the woman standing at the bow’s rail, her back to him as she stared out to sea. He liked to make the habit of getting to know the passengers, especially the upper class. Word of mouth was paramount to the success of his merchant ship. He had learned the ways of polite society at a young age and knew from many admirers he was quite handsome. The combination of the two went far in his business. “Let everyone know how well you were treated aboard the Pembroke,” he would bow and tell them as they disembarked at the end of the journey.

Aaron shook his head, returning to the moment. Perhaps she did not hear. The wind had picked up, and waves crashed against the side of the ship. “Madam? We have just left port and this will be your first night at sea. Are you faring well?”

A steady breeze blew across the ship. The woman wore no cap, and her blue silk dress whirled about in the wind, at times clinging to her body. Her dark hair reached almost to her waist and whipped around her in a seductive way. For some outlandish reason, Aaron longed to reach out and latch onto one of those silky locks, run it through his fingers then bring the tip to his nose to inhale the fragrance. The willowy figure in front of him didn’t acknowledge his presence, which made him all the more infatuated. She pulled her shawl closer to her body, tossed her head, and became still again.

Perhaps she is hypnotized by the sunset. It is one of the more magnificent ones I have seen in a while. Or enthralled by the crash of the waves on the bow? I sometimes cannot even hear when I am close to the ship’s edge with the wind and sound of waves in my ears. He wished to join her at the rail yet afraid he would startle her. So he stood quietly behind her, watching the edge of the horizon where the sky met the ocean, as the sun sank out of sight in a blaze of deep pink, golden yellow, and shades of purple. He felt a strange communion with her, this shadow of a woman who disappeared in the last ray of sunlight that almost blinded him.

Aaron blinked as if he had seen a mirage, but she was still there. He studied her carefully in case she might be one, so he would not forget a detail. Do not be a dolt. She is a real woman and is still standing there. Ignoring you! The captain of the ship. He cleared his throat. “I hope you continue to enjoy the evening, madam.” He turned and left in haste without looking back.

Volatile times engulfed 1715 Scotland. Threats of a Jacobite uprising hung in the air. Lady Juliet Kingston traveled to Glenhaven with her entourage to meet and marry Laird MacLaren’s son with the hopes their union might help calm the rumblings of war—an Englishwoman weds a Scottish Highlander. Juliet longs for home and the man she left behind, until she meets Ross MacLaren. Both are stubborn and strong, but find love. Now a threat comes from a different front, one Juliet cannot fight. She gives up her husband and home to protect those she has come to love and returns to England with John, her former beau. Will she ever find her way back?

After a great career in teaching, Nancy found a second calling as a writer. Born and raised in Northeast Ohio, she currently resides in Mentor, OH. Ohio is her home, but she loves to travel the U.S. Now Scotland is on her bucket list as a place she’d like to visit. Nancy is married and has one son.