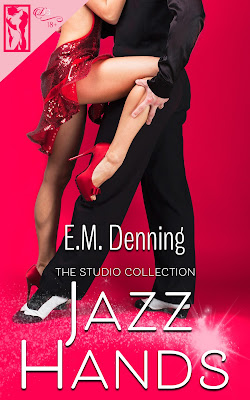 Katrina Hoffman can dance, but doesn’t. She hasn’t in years. But something is missing from her life right now, and she decides that one trip around the dance floor can’t hurt. When her first time on a dance floor in years thrusts her into the arms of a man who is practically her boss, Katrina’s pulse starts to race. At the office, Eugene is stern, dressed in suits and all business. Here, he’s relaxed and smiling, and the feel of his body against hers sends her head spinning.

Eugene has carried a torch for Katrina since the first day she waltzed into work. He wanted her before, but now that he’s felt her skin against his, her hands on his body, he needs to have her.

But when he does, will his confession send her running, or is the commitment-phobic dancer ready for something more?

Katrina’s six inch stilettos clicked on the floor as she entered the studio with her bag slung over her shoulder. Walking into a place filled with so much music and life and laughter reminded her of the years she spent in her grandma’s dance studio back home.

Katrina followed the sound of brass and swing, and slid into the room. She took a seat on one of the benches that lined the wall and bent to slide her stilettos off. She tucked them in her bag and dug out a pair of ice blue ballet flats. After tucking her bag under the bench, she glanced around. Next week, she’d have to try to show up a little early. Maybe she could partner with the tall, dark and dreamy man who was chatting up a leggy redhead.

Katrina’s head whipped around to see an equally tall and almost as handsome man staring down at her. Her lip curled into a sneer.

“What are you doing here, Hoffman?”

She tried not to check him out, but it was nearly impossible. She was so used to seeing him in suits and dress shirts, the sight of him in a tight fitting T-shirt made her heart race. Wide shoulders. Narrow waist. She wondered if he was hiding a killer set of abs under that shirt. As fast as the thought entered her head, she pushed it away. She could not crush on him. Eugene worked in the same division at the ad agency, and through some stroke of luck, he’d landed the promotion she’d been lobbying for. He was practically her boss.

Eugene stuffed his hands in his pockets and rocked back on his heels. “I’ve been coming here for a couple of years now.” His gaze lingered on her curves almost too long.

Katrina crossed her arms over her chest. She suddenly regretted the pale blue dress with the plunging neckline. “Of course you have.”

“You know, Kat, the beginner class is down the hall.”

Katrina raised an eyebrow. “I can dance circles around you in your sleep, Hoffman.”

“Then why haven’t you been here before?”

Katrina pursed her lips, uncrossed her arms and smoothed her dress. Before she got a chance to dodge his question, the instructor came in. He was dressed in black from head to toe, and the way his clothes fit him made it look like they were painted on.

He clapped his hands twice and a hush fell over the room. “Grab your partners.” He hop-stepped across the room and hit the music.

“Come on,” Eugene said as he grabbed Katrina’s hand.

Katrina yanked her hand out of his as if it were on fire. “No. Uh-uh. I’m not dancing with you.” Katrina crossed her arms in front of herself and looked around the room for someone else, anyone else, she could partner with.

Eugene held out his hand. “I’m your only hope, Katrina.”

She sighed and dropped her hand into his. “Ugh. Fine.”

“Well, you don’t have to sound so enthusiastic.” Eugene shot her a smile and pulled her closer to him. “Try not to step on my toes.”

Katrina took a step back and sneered, but when Eugene’s hand closed on hers, when he grinned and started to dance, she was swept up in his enthusiasm. He moved so well, so fast, yet every step was perfectly placed. She felt herself relax and start to enjoy being reeled in by Eugene only to pull away again. That was the beauty of jazz dancing; it was fast and fun, and she enjoyed improvising.

Katrina wasn’t the only one who liked improvising. Eugene reeled her in with a sharp tug. He used her momentum to launch her over his head. She slid down his back, and he grabbed her hands when she slid between his legs and pulled her to her feet.

Katrina paused and shot him a look of surprise. “If your mission was to impress me, Eugene, it certainly worked.”

Eugene reeled her in closer, his only response was the smirk on his lips and the mischievous gleam in his eye.

When the hour was up, Katrina found herself reluctant to leave. She sat on the bench and dug her shoes out of her bag to change back into them. She glanced up at Eugene, who stood there looking deliciously nonchalant with his hands stuffed in his pockets. “Do you come here every week?”

“Why? Are you hoping for a repeat next Friday?”

She saw a hint of a smile on his lips and imagined her tongue running along the curve of his lower lip. “There are worse ways to spend an evening.” Katrina stood up. With her heels on she was only a couple of inches shorter than Eugene, the perfect kissing height. He could sweep her into his arms and pull her into a mind-blowing kiss. The arm around her waist would hold her there leaving his other hand free to slide up her back or to get tangled in her hair.

“Are you? Because if you are I could definitely see myself coming back.”

Katrina stuffed her flats into her bag and slung it over her shoulder. “I guess you’ll just have to wait and see. Enjoy your weekend, Eugene.”

Katrina strode out of the studio and into the parking lot. She had to get out of there before she could act on any of her ridiculous impulses.

“What kind of a name is Eugene, anyway?” She said to herself as she pulled out of the parking lot. She tried talking herself out of her attraction to him. He’s not that good-looking, she tried to tell herself. But he was. His sandy hair had a slight wave to it and she could imagine her fingers raking through it. He’d always looked good in a suit, but nothing had prepared her for how he looked in that tight T-shirt.

When she got home there was a message on her answering machine from Ally-cat, wanting to know how her first lesson went. She erased the message and decided to call her friend back tomorrow. Allison had known her long enough to know that she didn’t need lessons and she’d known Allison long enough to know that wasn’t the question she was really asking.

Katrina popped open a bottle of wine and poured herself a glass. She brought it to her lips and took a generous swallow. She set the glass on the counter and grabbed her phone off the counter and dialled her brother’s number. He wouldn’t be home for hours and he was the first person she wanted to tell. He was the only person who could really understand.

As predicted, her call was sent to voicemail. “Hey Scotty.” She paused, took a breath to steady herself, then continued. “I went dancing tonight. I went to a jazz dance drop in at this studio a friend of Allison’s recommended, and I did it. Talk to you soon, love you, brat.” She ended the call and returned the phone to the cradle. She grabbed her drink and drained the rest of it in a couple large swallows.

Kevin promised his sister to walk her down the aisle at her wedding. This wouldn’t be so bad, but she’s also making him dance with her. There’s only one problem—Kevin can’t dance.

Determined to have the perfect day, Kevin’s sister signs him up for dancing lessons. His instructor, Ginger, thinks he bit off more than he could chew and offers him some private instruction after class. As his sister’s wedding approaches and his lessons come to an end, he soon learns the benefit of following Ginger’s lead.

Allison Elliot was too short to be a ballerina—according to the studio that turned her away. Determined to pursue her childhood dream of learning ballet, she signs up for lessons at a different studio and quickly catches the attention of her instructor.

Josh Owen is more than happy to be her teacher, and maybe more if she’d let him, but she doesn’t seem to notice his advances. Is she oblivious to the obvious chemistry between them, or is something more going on? When Allison threatens to drop his class, Josh urges her to reconsider. Will she stay, or will she give up on two dreams—ballet and love?

E. M. Denning is a writer from British Columbia. She loves her family and her animals and anything cute and fuzzy. She was born a hopeless romantic and when she’s not writing romance, she’s probably reading it. She loves love.